Posted on December 8, 2017 by Victor Rosenthal 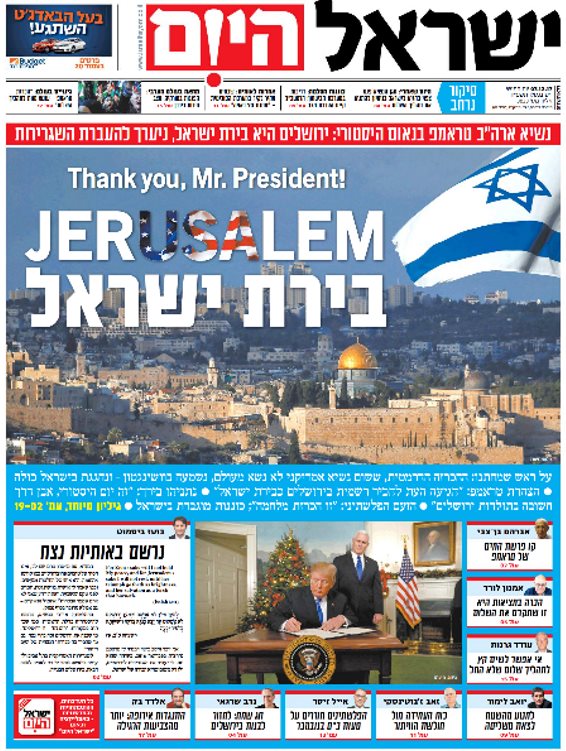 In a very carefully written speech, Donald Trump announced that the US would recognize Jerusalem as the capital of the state of Israel, and that he would begin the process of moving the US Embassy from Tel Aviv to Jerusalem. The video and transcript of his speech are here.

So is this a big deal or not?

I think it is, although it will depend in part on what happens afterwards.

Do you remember when Arafat recognized the state of Israel as part of the Oslo accords? He and his successor Mahmoud Abbas made it abundantly clear that they “recognized” the state the way I would recognize an alligator lying across the sidewalk in front of me: I can’t pretend that she doesn’t exist, but I don’t believe that she has a right to be there. And I want her removed as soon as possible.

Trump made it clear that it was impossible to continue the pretense that somehow the status of Jerusalem is up in the air:

But today we finally acknowledge the obvious. That Jerusalem is Israel’s capital. This is nothing more or less than a recognition of reality. It is also the right thing to do. It’s something that has to be done.

If this were only what he said then the door is open for anyone to take the alligator interpretation. But he also said this:

Israel is a sovereign nation with the right, like every other sovereign nation, to determine its own capital. Acknowledging this is a fact is a necessary condition for achieving peace. It was 70 years ago that the United States under President Truman recognized the state of Israel.

Ever since then, Israel has made its capital in the city of Jerusalem, the capital the Jewish people established in ancient times. [my emphasis]

He didn’t have to add that last sentence. But he did, and it is the most important one in his speech. It refutes the attempts of the PA and their allies at the UN to deny the historic connection of the Jewish people to Jerusalem. And it supports the legal argument that the Jewish people  are indigenous to the land, and have aboriginal rights to Jerusalem (and by extension, all the land of Israel).

The US State Department has insisted that the status of Jerusalem – all of Jerusalem – must be determined by negotiations between the parties. It held that until then, the various UN resolutions that call for Jerusalem to be an internationally governed corpus separatum are theoretically operative. It has been a source of derision for years that the State Department refused to say what country Jerusalem is in. Trump has finally put an end to this silliness .

Nevertheless, Trump did not refer to a “unified” Jerusalem, and he emphasized that the boundaries of Israeli (and presumably, Palestinian) sovereignty in Jerusalem will be determined by future negotiations. For the first time, he referred to a “two-state solution,” although he added “if agreed to by both sides.” In other words, he opposes the idea of an imposed solution.

He also did not mention “pre-1967 lines,” nor did he say anything about  East or West Jerusalem.  It’s been Israel’s position – and also that of the Arab signers of the 1949 cease-fire agreement – that the armistice line (the “Green Line”) has no political significance, and is in no sense a “border.” Indeed, this is implied by UNSC resolution 242, the basis for all subsequent “peace processing,” when it calls for “secure and recognized boundaries:” the understanding is that the Green Line is neither secure nor recognized by either side.

The introduction of “pre-1967 lines” as the “basis” of an Israeli-Palestinian settlement in Barack Obama’s 2011 peace proposal was particularly objectionable for this reason.  The concept of “land swaps,” by which the Palestinians would receive land west of the line in compensation for land in settlement blocs that would become part of Israel is also problematic, because it implies that all of the land east of the line “belongs” to the Arabs ; otherwise, why should they get something in return for it?

Trump’s announcement that he has directed the State Department to begin the process of moving the embassy is welcome, but since he has signed the waiver to give him another six months, it essentially adds nothing to the promises that he has already made. He did not mention the waiver in his speech.

Naturally, the threats from those who believe there should be no Jewish state – because that is what it means to say that Jerusalem is not part of it – are flowing in as predictably as the tide. There will be Palestinian “days of rage” which will result in disturbances and possibly terrorism here. Turkish President Erdoğan has threatened to break relations with Israel, a stupid move which will get him nothing. Arab and European leaders have also objected, claiming that it will damage the nonexistent and impossible “peace process.” However, the consensus is that Saudi Arabia and other Sunni Gulf states as well as Egypt won’t go any farther than harsh words.

The best thing that could happen would be if other nations followed the US. Agreement or at least acquiescence by Saudi Arabia or Egypt – a crack in the anti-Israel wall built by the Arabs with their famous “three no’s” issued at the Khartoum summit in 1967 – would be fabulous, but probably Israel will have to settle for something less. Jordan’s ungrateful little King Abdullah, who seems to think that Moshe Dayan’s foolish decision to leave the Jordanian waqf in control of the Temple Mount granted him sovereignty over all of Jerusalem, is expected to splutter, and this perhaps will slow the resumption of normal relations with Israel, which were disrupted by the recent incident in which an Israeli security guard killed two Jordanians after one of them tried to stab him.

Western Europe will continue in its hostility. In my opinion, attitudes there have gone beyond sympathy for the Palestinian Arabs, and they are deep into antisemitism.

The world isn’t what it was in 1990 or even 2000. The US is not the major player in the Middle East any more, and relations between the regional powers may be more important than the influence of Washington. Russia’s clout here is growing as well. Although Russia has recently expressed concern that US actions might damage relations between Israel and the Palestinians, the Russian Foreign Ministry issued a statement in April that, while continuing to call for a Palestinian state with a capital in eastern Jerusalem, recognized Israel’s claim to its own capital in the western part of the city.

I think it’s worth emphasizing the surreal nature of this issue. Israel controls Jerusalem. As Trump noted, the President of Israel and her Prime Minister live in Jerusalem, her Knesset and cabinet meet in Jerusalem, her ministries have offices in Jerusalem. It has been thus since Jewish sovereignty in the land of Israel was reestablished after thousands of years of exile. No other nation has made Jerusalem its capital city since the Jebusites lost it to King David’s army around 1000 BCE.

Israel, as in so many other areas, gets “special treatment” on this question by the international community. Every other country is permitted to designate its own capital. Despite the fact that the indigenous population was rudely displaced by the construction of a new capital city, Brasilia, in 1960, nobody has claimed that the capital of Brazil is still Rio de Janeiro or has kept their embassy there.

And yet, successive American presidents have refused to recognize the simple fact that Jerusalem is our capital. Several have promised to do so, but until Donald Trump, none has kept his promise. Yesterday, this man – who is so fiercely criticized in his own country – became a hero to millions of Israelis from almost all political factions.

This entry was posted in Middle East politics, US-Israel Relations. Bookmark the permalink.