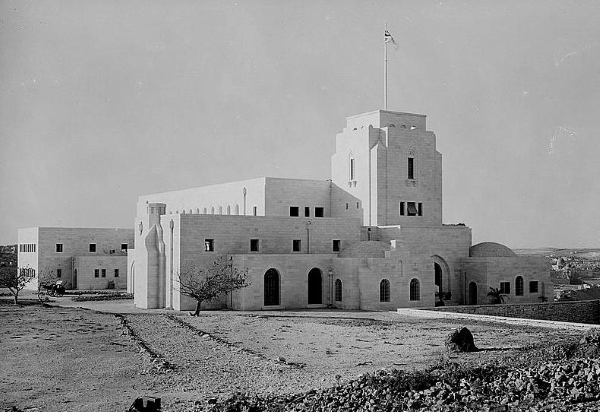 Armon Hanatziv, in the days of the British Mandate

[The British High Commissioner] grabbed the most fantastic place in the world … built a palace there, and every morning when he wakes up and opens his eyes … can see from the palace windows the loftiest and most holy view in the world, as if it were his.

After the First World War, the British became the last in a line of foreign powers ruling over Judea, including Jerusalem. Like any conqueror, the British built monumental palaces for its administrators. From 1920 to 1927, the High Commissioner’s residence and offices were located in the Augusta Victoria Church and hospital compound on the Mount of Olives. A beautiful place, but after it was damaged in an earthquake, the Empire decided to build a new and even more glorious seat of power at a spot with an even better view, the Hill of Evil Council (not “Counsel”) – so called by the Byzantine Christians because it was said to be where Temple priests met to discuss betraying Jesus.

The grand building was constructed between 1928 and 1933, and its first resident was High Commissioner Sir Arthur Grenfell Wauchope, who seems to have been one of the better ones. It is a stunningly beautiful building (the UN renovated it in 2012) in one of the most beautiful spots in the world. I can’t imagine how much the property is worth (maybe Donald Trump could). In Hebrew, it’s called armon hanatizv (the commissioner’s palace), and that also became the name of the neighborhood around it.

In 1948 when Britain was forced to retreat from Palestine by yet another indigenous revolt in its rapidly fragmenting Empire, it transferred control of the property to the International Committee of the Red Cross, which gave it to the UN. It was part of the Demilitarized Zone which existed until 1967, when it came under Israeli control. The UN demanded it back, and after an abortive struggle, Israel knuckled under. Nadav Shragai explains the historical details and legal issues here.

The UN has since made modifications to the building, appropriated land adjoining the main structure and put up additional buildings, all – needless to say – without obtaining permits from the municipal authorities. The UN did not purchase the site, and never paid rent or municipal taxes on it. The most recent official reason for the UN presence there was to house the observers responsible for monitoring the truce in effect after 1967. This has long since become irrelevant; as Shragai notes “Israel has peace treaties with Jordan and Egypt, and in Syria everyone is fighting everyone.”

The UN is an organization that is hostile to the state of Israel, as is shown by the continual flow of anti-Israel resolutions from its various agencies. The cost of any improvements that it has made are a drop in the bucket compared to the amount of back rent Israel would be owed, if anyone chose to try to compute it.

Minister of Culture and Sport Miri Regev is the most recent Israeli official that has called for the property to be returned to Israel (in this she joins Levi Eshkol, various literary figures and numerous government officials over the years since 1948). The UN and some in the Israeli Foreign Ministry claim that the UN is protected by diplomatic immunity and that we can’t make them leave.

I think this controversy encapsulates the attitude of the Christian and Muslim world toward Jerusalem, and indeed the land of Israel. They have never accepted the possession of the Holy City and the Holy Land by its true owners, its Jewish indigenous inhabitants, and have tried continuously in one way or another to take it away from them.

Time and again the government of Israel takes a pragmatic attitude and allows the UN, the Islamic wakf, the US Department of State and others to symbolically deprecate Jewish sovereignty in Jerusalem, our capital city.

Here is an opportunity to take a stand for sovereignty and against the corrupt and anti-Jewish UN. Despite the absolute aptness of placing the UN on the Hill of Evil Council, the site does not belong to them. If they need a headquarters in our country, they should be required to rent office space like anyone else.

I know a presently unoccupied spot in Tel Aviv’s Central Bus Station that they can get cheap.

This entry was posted in Israeli Politics, The UN. Bookmark the permalink.