The Reform Movement vs. Bibi Netanyahu

Posted on November 7, 2016 by Victor Rosenthal 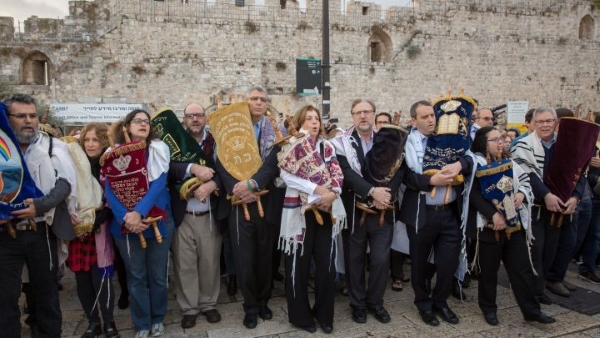 Non-Orthodox rabbis and Women of the Wall at the Kotel, 2 November 2016. Rabbi Rick Jacobs of the URJ is the tall man near the center; to his left is Anat Hoffman.

Last week saw a protest by Reform and Conservative Jews, both American and Israeli, in support of the Women of the Wall, at the Kotel (Western Wall).  The demonstrators were protesting the fact that an agreement that the government, the Women of the Wall and the non-Orthodox movements in Israel reached ten months ago had still not been implemented. The agreement would have enabled women-only and mixed-gender Torah services at Robinson’s Arch, a location at the southern end of the Kotel near the archaeological park. But the government has not fulfilled the deal due to pressure from the Haredi (ultra-Orthodox) parties in the coalition.

The protest was led by American rabbis Rick Jacobs of the Union for Reform Judaism, and Steven Wernick of the United Synagogue for Conservative Judaism, as well as Yizhar Hess of Israel’s Masorti (conservative) movement. Jacobs is by far the most important player; the URJ is the 800-pound gorilla of American liberal Judaism with about 750,000 members.

The rabbis and others carried sifrei torah (Torah scrolls) into the women’s section where the Women of the Wall held a service in defiance of the rules of the Orthodox authorities, which do not allow women to carry or read from Torahs. According to participants, they did not expect to be allowed into the plaza in front of the Kotel with the Torahs. But they easily pushed past ushers and entered, where they were confronted by counter-protesters.

Although there was no bloodshed, the level of violence was higher than at previous confrontations, and the presence of officials of the American non-Orthodox movements (who were in Israel for a meeting of the Jewish Agency Board of Governors) raised the profile of the event. The sight of some Jews (video) trying to tear sifrei torah out of the hands of the others was highly disturbing. At one point, Hess was knocked down by counter-demonstrators.

I am a member of a Masorti congregation in Israel, and I believe in egalitarian worship. I believe that women should be allowed to hold and read from sifrei torah. They do it every Shabbat in my synagogue. I think the government should keep its word and implement the agreement to make a place for mixed worship at the Kotel. But I think my movement made a serious error when it chose to participate in this demonstration. I believe the Masorti movement – and the Women of the Wall as well – have been co-opted into a struggle whose goals are primarily political, anti-government and even anti-Zionist.

For some years the URJ has been engaged in a campaign, which it presents as analogous to the American civil rights struggle, to make Israel more ‘democratic’ and ‘pluralistic’. The goal in Israel is to obtain government financial support for alternative forms of Judaism, where only Orthodox institutions now receive such support, to allow their conversions and marriages to be recognized, and so on.

Although only some 8% of Israeli Jews are affiliated with non-Orthodox synagogues, probably a majority would not object to ending the ultra-Orthodox monopoly on everything related to Judaism. It is not an exaggeration to say that this monopoly is one of the most corrupt, hypocritical, unproductive and undemocratic institutions in the state. It seems reasonable for the Israeli branches of the non-Orthodox movements to try to change the government’s policy in their favor.

But a campaign is also being waged in the US, aimed at American Jews. Here it has two goals: first, to pressure the Israeli government to act on behalf of the non-Orthodox movements in Israel; and second, to embarrass the government and PM in order to achieve the political goals of the Obama Administration in the US, to which the URJ is closely tied.

Consider that the URJ President, Rabbi Jacobs, had an activist role – more than just a membership – in the phony “pro-Israel” J Street, and the extreme left-wing New Israel Fund before taking office, although pressure from pro-Israel elements forced him to put these activities on hiatus when he became president. In addition, Jacobs proudly described his participation in a demonstration against the Jewish presence in the Sheikh Jarrah neighborhood of Jerusalem in a Yom Kippur sermon delivered at his congregation (details can be found here). When the Council of Presidents of Major Jewish Organizations voted to not admit J Street as a member, the URJ threatened to quit. More recently, the URJ chose not to take a position on President Obama’s Iran deal. Rabbi Jacobs and other spokespersons for the movement are solidly behind the two-state fantasy.

Jacobs has made it clear on several occasions that he and his organization have the right, indeed the duty, to try to change Israel in order to make it better fit their vision of what a Jewish state should be.

The Women of the Wall are now led by Anat Hoffman, an organizer employed by the URJ. Although the group’s original goal was to get the rules changed to allow a woman-only minyan to pray in the women’s section of the Kotel with sifrei torah, Hoffman and the movements broadened the demands to include mixed-gender services, and negotiated the move to Robinson’s arch. Phyllis Chesler, a member of the original group referred to this development as a “betrayal of our mission, our legal and halachic foundation, our mandate, our vision.” Hoffman has also used confrontational tactics, which attract publicity to her cause, but harden opposition from the Orthodox.

The language used by URJ spokespersons in the US is highly inflammatory. Israel – not just the Orthodox establishment, but the PM, the government and by extension the nation as a whole – is accused of “delegitimizing” the non-Orthodox community throughout the world (and especially in America). The presentation of the issues as a civil rights struggle was eagerly accepted by American liberals, for whom the civil rights movement of the 1960s is still at the forefront of their consciousness.

I recall an American Reform Jew angrily telling me that he would never again support Israel in any way after his rabbi gave a sermon comparing bus lines in Haredi neighborhoods where women were forced to ride in the back, to the segregated south. A woman who objected was called “the Israeli Rosa Parks.” Never mind that these buses created outrage in the non-Haredi community and that the Israeli Supreme Court outlawed the practice. That was it for this man as far as Israel was concerned!

The controversy over a proposed law about who will be permitted to officiate over conversions in Israel (conversions overseas were not affected) was also taken up as a cause by the URJ, as was a law to require foreign-funded NGOs to report the sources of their funding, and a proposal to define the “Jewishness” of the state. Even Hillary Clinton joined in the criticism of “anti-democratic” trends in Israel at one point.

The leaders of Diaspora Jewry love Israel, embrace the Zionist cause, and fight for Israel’s legitimacy in the world. They do this because they must — because no matter where they reside physically, Israel, warts and all, is for them both home and holiness. But incredibly, in return for their devotion, the government of Israel thumbs its collective nose at Diaspora concerns, dismissing with contempt the religious legitimacy of millions of Diaspora Jews.

Leaving aside the reasonable doubt that the URJ in fact embraces the Zionist cause – as shown by its closeness with J Street and failure to stand with Israel on the Iran deal – there is the fact that Diaspora Jews are not “delegitimized.” They are not prevented from worshiping at the Kotel. They are only asked to follow the local customs – admittedly different from their own – when they come to Israel and visit the Kotel. While the government is obligated to implement the compromise solution it agreed to, the reaction of the URJ and its followers is exaggerated and seems more intended to bring about confrontation than cooperation.

One indication of the political motivation of the protestors is that after PM Netanyahu asked movement leaders  beforehand to “show patience and tolerance” and not to provoke a confrontation, they did it anyway. They had waited long enough, and in the words of Rabbi Yoffie, the government was “stonewalling.”

But in response to a petition by the movements, the Supreme Court has given the government until November 17 – that’s less than two weeks from today – to explain why it hasn’t implemented the agreement! So why was it necessary to provoke a confrontation? And why disrespect the PM?

Netanyahu is in a difficult spot, with the Haredi parties threatening to block his initiatives or even bring down the coalition. There are far more important things on his agenda, such as the forthcoming anti-Israel initiative from lame-duck Obama. You can understand that he asked for patience on an issue that concerns only a small number of Israelis and an American movement that has not exactly been supportive of him. Just wait a couple of weeks and the Court will solve everyone’s problem.

But the URJ and its followers don’t care. Whose side are they on?

Update [2129 IST]: It should be clear that I view the Women of the Wall as having a legitimate grievance, as do the non-Orthodox movements in Israel.

My problem is with the American movements (particularly the URJ which I believe is the instigator) that are using these issues — and the Women of the Wall — to push a left-wing political agenda and to attack the government and the PM.

1 Response to The Reform Movement vs. Bibi Netanyahu