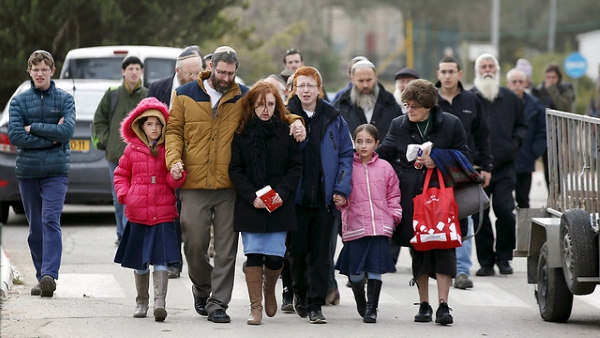 The family of Dafna Meir arrives for her funeral

The murderer of Dafna Meir, a mother of 6 children has been arrested. He is a Palestinian Arab variously reported to be 15 or 16 years old, from the nearby village of Beit Amra.

Arrested, unfortunately – take note, Margot Wallstrom – and not cut down on the spot like the monstrous devil spawn that he is, as justice, honor and deterrence demand.

My initial angry reaction was that we should kill 100 Arabs, 10 each for her, her husband, her children and her parents. But that would have little effect, since, as they often remind us, they love death as we love life. And from what I have read about Dafna Meir, a nurse who devotedly took care of everyone, Arab and Jew, that most definitely would not have been her wish.

But collective punishment is appropriate here because there is collective guilt. His village and his people praise terrorists and make heroes out of them. The leaders that they support and their media encourage and incite murder. Their religious guides tell them that a boy who slaughters a Jewish mother in front of her children is an example for all Muslim youth, and if he is killed in the process he will go to paradise where he can have all the sex that his repressive culture denies him on earth.

They have created a generation that murders Jews as easily as cutting the throat of a goat to cook for dinner.

So what can we do? What will satisfy our need for justice, preserve our honor and deter our enemies?

Here is what we can and must do: build settlements, as many as we can, in the Hevron Hills area. Name them after Dafna Meir if you wish. Confiscate land from the Arab village of Beit Amra to build them. Dispossess the inhabitants or just let the village wither.

The violence we are experiencing is a battle in a war for possession of the land of Israel, the continuation of our War of Independence. If we understand this, then the proper response to it will be clear.

2 Responses to For Dafna