Defensive weapons and the strategy of preemption

Posted on December 25, 2015 by Victor Rosenthal 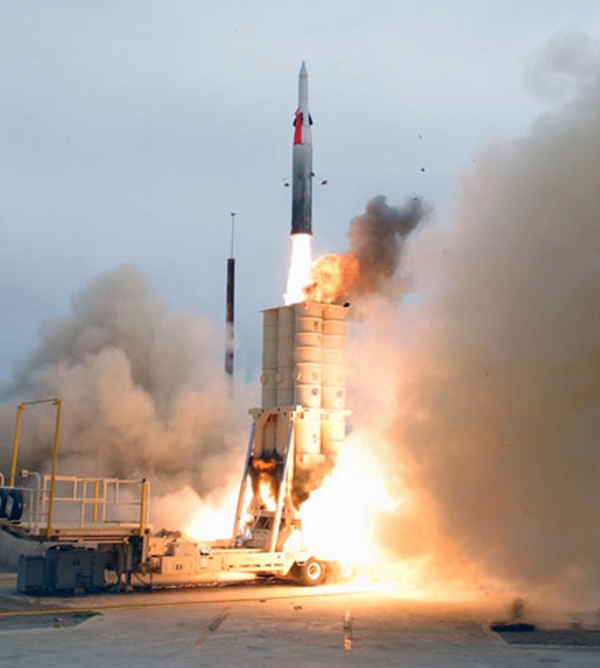 A test launch of the Arrow-3

This week the new medium-range anti-missile system called “David’s Sling” was declared operational, and is expected to be deployed in 2016. It will join the existing Iron Dome systems for short-range rockets and the Arrow 3 system for intercepting ballistic missiles and satellites in space, to provide a multi-tiered missile defense for the country.

It’s great that we will have these systems. But it’s important to understand what they can and cannot do. In particular, they cannot allow Israel to replace its traditional doctrine of preemption with passive defense.

The systems themselves are astronomically expensive. Each Iron Dome system costs from $50-100 million; I expect that the other systems will prove to be at least equal in cost. The interceptors that they fire are also expensive: The tamir missiles used by Iron Dome cost around $50,000 each, and two are usually fired at a time. The ‘Stunner’ interceptor fired by David’s Sling costs about $2.7 million, and the ones used by the Arrow 3 go for ‘only’ $2.2 million each.

In comparison, Hamas’ short-range Qassams are estimated to cost up to $800 each. Hamas’ rocket warfare therefore has an economic dimension as well.

The greatest weakness of these systems is that they can’t be everywhere at once, and Hezbollah, Iran and Hamas have a massive quantity of rockets. It was estimated in 2013 that Hezbollah could launch “as many as 1,500 short- to mid-range rockets” every day for a month. Given the improvements in accuracy that Hezbollah has made to its rocket arsenal since 2006, it would be difficult to defend all of northern Israel with the 10 Iron Dome systems it presently has (15 are planned), especially if Hamas is firing rockets at the same time.

Israel’s enemies have fewer longer-range missiles, but their range means that there are a greater number of possible targets that need to be defended. Hezbollah has improved its concealment and fortifications for these weapons, so it will be harder to destroy most or all of them before they can be used, as was done in 2006. Hamas, too, has not been standing still.

A further ramification is that Hezbollah’s more accurate weapons will be directed at important military and industrial targets, like airfields, power stations and substations, oil refineries, military bases, radar and communications installations and command centers. These will need to be defended by antimissile systems, leaving civilian areas unprotected. Certainly Ben-Gurion Airport, the Kiriya in Tel Aviv, the nuclear installation in Dimona, and numerous other locations cannot be left unprotected.

It is probably not an exaggeration to say that the majority of our antimissile systems will be dedicated to protecting non-civilian targets. The population will need to depend on shelters for protection. In many areas shelters are inadequate, especially given the high density of fire that is expected. Property and infrastructure damage will also be extremely high.

These defensive weapons are not an unmixed blessing. One reason is that decision-makers could depend too strongly on them and reject (or postpone) the offensive or preemptive strategies that Israel has traditionally chosen. We could end up responding to an attack after it happens as in 1973, instead of preempting one as in 1967.

Another more subtle issue is that a tolerance develops, both in Israel and outside of it, for the provocations of our enemies. It’s often said that “no other country would accept” a rocket bombardment like southern Israel has absorbed from Hamas, but one of the reasons that Hamas has not yet been crushed is that Israel is able to manage its rocket bombardments.

Further, if Israel had not had Iron dome, then retaliation for Hamas rocket attacks – now pro forma – would have been made far more painful. Hamas is therefore encouraged to continue developing, stockpiling and even launching its rockets at Israel. It has little to lose from doing so. So in a sense, Iron Dome degrades our deterrent power instead of enhancing it.

Finally there are psychological effects from allowing bombardments to continue. For our citizens in the target areas, the stress and psychological damage is a serious problem even if all the rockets are intercepted. For the outside world, shooting at Jews becomes the everyday normal – it is nothing to get upset about, or even to report in their media.

The US has been generous in assisting Israel with the development of these antimissile systems, something which President Obama never fails to mention when talking about his “unshakable commitment” to Israel’s security. But he has been less forthcoming when Israel has asked for offensive weapons, particularly those that could be employed against Iran. Of course he has policy reasons for this, but I also believe this is a continuation of the historical tradition – and I mean the one that has persisted for millennia in both the Christian and the Muslim worlds – that a Jew does not have the right to actively defend himself.

I am not suggesting that Israel should not pursue development and further deployment of antimissile systems. Because of the country’s lack of strategic depth, they are absolutely necessary to protect its ability to fight. They can also provide a certain amount of protection for the population, especially in situations short of all-out war. They are an essential part of our strategic posture.

But Israel’s primary defense strategy should continue to be preemption. Because the IDF is numerically weaker and the country physically smaller than its enemies, the element of surprise and the ability to choose a time to fight when the enemy is unprepared are paramount in avoiding casualties among our forces and on the home front. Surprise is also important to provide enough time to achieve our objectives before our ‘allies’ can step in to end the conflict to our disadvantage.

The downside of preemption is that the world, including the aforementioned ‘allies’, will interpret it as ‘aggression’, and try to prevent Israel from obtaining military victory and even penalize us. Much of the world considers Israel’s preemptive attack in June of 1967 to be aggression, despite the blatantly offensive nature of the Egyptian buildup, the expulsion of UN peacekeepers and closing of the Straits of Tiran. And Golda Meir’s failure to preempt in 1973 – because of her fear of US reaction – almost resulted in Israel’s defeat in that war.

I view this, however, not as an argument against the strategy of preemption, which is still the best strategy from a military perspective, but as a reason to accelerate Israel’s efforts to reduce dependence upon the US. That is something that we should do anyway, for a multitude of political and strategic reasons.

In the specific case of Hezbollah, the decision to preempt will not be easy. Hezbollah has embedded its rockets and other targets in the civilian areas of Lebanon, a war crime. An attack on them without warning will doubtless kill many noncombatants. From a humanitarian point of view this would be tragic, and practically would result in worldwide condemnation, even though from a legal point of view these casualties would be Hezbollah’s responsibility.

On the other hand, if we wait for Hezbollah to attack, we will still have to bomb these targets, and in addition we will suffer our own casualties. It’s generally thought that Hezbollah will launch ground incursions (perhaps underground ones as well) as well as rocket and drone attacks, and who knows what else. A preemptive strike may defuse many of these and provide us a great advantage.

I understand that Hezbollah today is in trouble in Syria and does not desire a war with Israel. So maybe now would be a good time to give them one. Or should we wait until Iran’s financial windfall from the nuclear deal allows them to rebuild Hezbollah’s forces? Or until Iran has usable nuclear weapons?

The initial question that we must ask today is “is war with Hezbollah inevitable?”

If the answer is yes, then I think the only thing left to decide is when and how to strike first.

2 Responses to Defensive weapons and the strategy of preemption