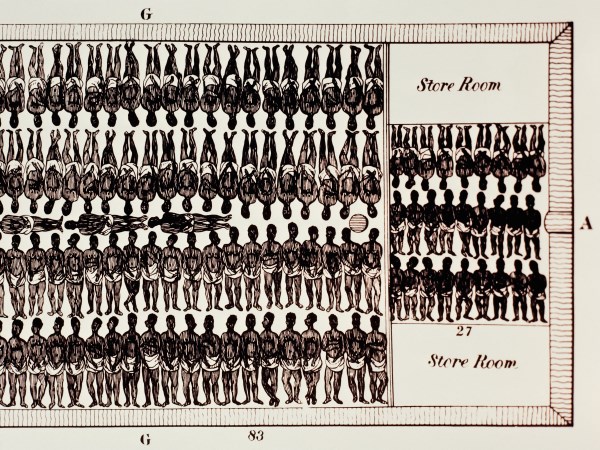 Part of a diagram of the interior of a slave ship

When I came back to Israel after 26 years, obviously some things were different. But they were inessential things, like parking and economics and military threats. Israelis are still Israelis. I’ve been away from America for less than a year, and it seems like another planet.

I was already noticing the obsession with race before I left. The election of Barack Obama, which should have marked a reduction in racial tension, had the opposite effect. Race became even more important among the explosive devices in the minefield of political correctness; one of the things that one had to be exquisitely careful about in conversation. Step on a mine and there might or might not be an immediate explosion, but afterwards nothing you say will be taken seriously.

Most Israelis do not get this yet, thank God. Judy Mozes, a radio personality and the wife of a government minister tweeted an unfunny joke about “Obama coffee” being black and weak. The joke was immediately slammed as ‘racist’ and Mozes forced to apologize.

It’s interesting to ask what is supposed to be so offensive here. Apparently, one is allowed to mention Obama’s race as long as the context is positive. You can say that he is black and strong, but not that he is black and weak. As many observers noted, it doesn’t compare in offensiveness to calling our Prime Minister “a chickenshit,” but whenever race is involved all comparisons fail.

In America, it’s moved beyond political correctness and unfunny jokes. A stupid, evil young man murdered nine people at Bible study because they were black. He looked them in the eyes and murdered them.

It’s easy to find parallel crimes here. Last year two Arabs entered a Jerusalem synagogue and shot and hacked four rabbis and a Druze policeman to death. In the last two days, a Jewish man was murdered and another is in critical condition in two unrelated incidents. In both cases, the Arabs looked the Jew in the eyes and then attacked him.

It is not, however, the same. In our case there is a historical struggle going on. The Arabs have been trying to drive the Jews out of the land of Israel for at least a hundred years. Their murderous actions have a purpose, despite being fueled by racial hatred. In America there’s only the hatred.

I think the explanation lies in history. Black slavery existed in the US for hundreds of years before the Civil War. Everyone knows this, and everyone (I hope) understands that slavery was immoral and evil. But it’s necessary to learn the day-to-day details of the literally atrocious treatment that slaves received to properly understand just how evil. The only living things treated quite as badly as slaves are  animals raised for meat or laboratory experiments.

Slavery in America affected both blacks and whites long after its end. Blacks were understandably angry, but they developed strong family and religious structures which helped them survive in an environment that remained hostile (more recently these structures have fallen apart, in part as a consequence of policies that were intended to repair the damage done by racial prejudice in the larger society). They are still angry.

Whites, on the other hand, bore a large burden of guilt for the institution of slavery, and then for the oppression that followed. Nothing makes you hate someone as much as knowing that you have done evil to him, and this hatred nurtured itself and didn’t disappear. Now that the society is suffering multiple dislocations — middle-class status is becoming harder to hold onto than ever, white families are almost as broken as black ones — some people are holding on to the old race hatred as an anchor.

It’s horribly appropriate that the latest ugly manifestation of racial hatred exploded in Charleston SC, arguably the epicenter of the slave trade in America, in the church founded by Denmark Vesey, a free black man who was executed (lynched, if you prefer) in 1822 for planning a slave uprising.

The racial obsession could be called “the American sickness.” Unfortunately it distorts American perceptions of events in other places. It’s easy for someone like President Obama, who is ignorant of our history, and who learned at the feet of Edward Said, to see our conflict with the Palestinian Arabs in terms of the racial divide he knows so well.

But Israel is not America, and ‘Palestinians’ are anything but the descendents of black slaves and the victims of segregation, Jim Crow and apartheid.

My advice for the USA in this difficult and frightening time is this: work out your racial issues and fix them. And in the meantime, don’t press your hangups on us.