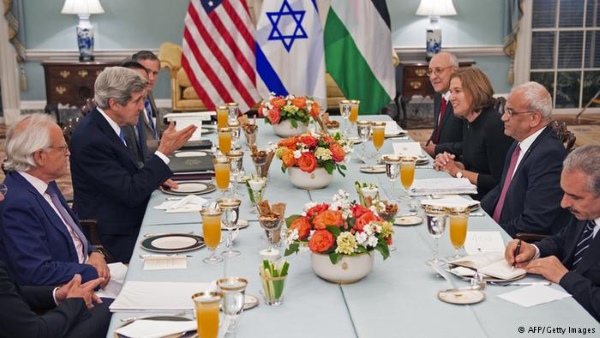 One of the many incarnations of the ‘peace process’. This meeting was in the summer of 2013.

The peace processors, with US president Obama in the lead, never seem to give up. The reason for their lack of success is simple: they are trying to do something impossible: satisfy Arab aspirations without destroying Israel.

Why do they keep trying? One main reason is that the single body that above all should convince them that it’s impossible — the government of Israel — tells them it’s not.

It isn’t that nothing can be done. It’s that the peace processors are stating the problem in a way that doesn’t admit a solution. “The Palestinians deserve a state [in Judea/Samaria],” says Obama, so we have to find a way to get them one that doesn’t leave Tel Aviv under rocket fire.

Nope. There isn’t a way to do that. Let’s start with a clean slate and restate the problem in a different way that might make it easier to solve, or at least ameliorate.

Problem: the Arab world and Iran want to destroy Israel, and disperse, murder or make dhimmis of its Jewish population. This has been true since 1948, but today it is compounded by the chaos in the Arab Middle East and the collapse of the Pax Americana.

If this is the problem we are trying to solve, one of the first things we notice is that Israel must retain control of Judea and Samaria. A withdrawal, accompanied by the transfer of hundreds of thousands of Jews, is absolutely the worst thing that we could do under present circumstances, from the standpoint of security as well as the social and spiritual health of the nation.

But as everyone from the President of the US to the President of Israel will immediately tell you, Israel can’t absorb all those Arabs and still remain a Jewish and democratic state. Something has to give.

OK, fine. I accept that we can’t simply annex the territories and give all the Arabs citizenship (even if there were a significant Jewish majority, there would still be a big enough Arab minority to change the nature of the state), and it seems that we can’t not give them citizenship. This is also a difficult problem. But unlike the idea of a Palestinian state alongside a secure Israel, it’s not insoluble.

Before everyone accuses me of being a Nazi, keep in mind that the peace processors envision the removal, transfer, expulsion, eviction, forced relocation or whatever you want to call it of hundreds of thousands of Jews who presently live in the territories, because they accept the vicious racism of the Palestinian Arab leadership who will not have Jews living in their state. Who are Nazis now?

The situation is asymmetrical. About 20% of Israel’s population today is Arabs. There are tensions, but the Jews are not demanding to throw the Arabs out. So given that it is the Arabs who can’t abide Jews and not the reverse, why is the solution to transfer the Jews away from the Arabs and not vice versa? Why should the Jews pay the price for Arab ethnic hatred?

Let me ask my question in another form: Why is the solution to the problem that they hate us and want to kill us that we should leave our homes and in the process make it easier for them to kill us?

No, I don’t have a plan. I don’t know where the Arabs could go, or alternatively how they could reconcile themselves to living in a Jewish state, or how an autonomous-but-not-sovereign state in some part of the territories would work. There are lots of possible plans. But there are also lots of smart people who have been working to create ‘Palestine’. Let them work on alternatives.

I do know that we won’t get either security or justice by implementing yet another forced transfer of Jews in order to create a racist, apartheid, terror-enabling Arab state in our historic homeland.

1 Response to Restating the problem