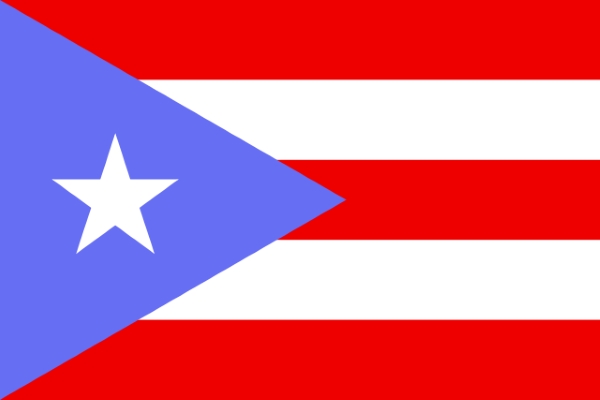 Flag of the Commonwealth of Puerto Rico

Israel is constantly being told that its control of Judea/Samaria is illegal and undemocratic. We are told that if we continue to hold this territory without making all the inhabitants citizens of Israel, then we are an apartheid state, which all decent people should shun, boycott, divest from and sanction.

But what if I told you (as I was reminded yesterday by a correspondent) that there is another country that occupies territories which it (mostly) gained through conquest, and whose 4,065,516 inhabitants do not have a vote in the legislature and cannot vote for the president, but who still have to obey laws passed by the legislature, pay taxes, and be subject to military conscription?

The largest of these occupied territories has a nationalist movement, had an insurrection put down by force, and even engaged in terrorism against its occupier for nationalistic reasons.

Of course I am talking about the United States and its five inhabited ‘territories’, the largest of which is Puerto Rico.

Unlike the US, which invaded and seized Puerto Rico (along with Guam, Cuba and the Philippines) from Spain during the aggressive Spanish-American war, Israel has a legitimate right to Judea and Samaria based on the Palestine Mandate. Its victory in the defensive war of 1967 overthrew the illegal occupation of the area by Jordan, which invaded it in 1948.

Puerto Ricans elect a governor, local officials, and a representative to Congress who can take part in debates, but can not vote on the floor (although he can vote in committees). Since 1952, it has been a ‘commonwealth’ like several states. Needless to say, Puerto Rico does not have an army, and does not dedicate about 30% of its budget to support six branches of its ‘security services’, as the Palestinian Authority does.

I am not suggesting that creating an Arab entity with ‘territorial’ status in part of Judea and Samaria would be practical. It works for Puerto Rico because its inhabitants are in general interested in their day-to-day welfare, and not in destroying the United States and killing or driving out its non-Puerto-Rican inhabitants (in a recent referendum, some Puerto Ricans voted for statehood, others to continue territorial status, and about 5% for independence). They are not subjected to a barrage of incitement to hate and kill from their official media.

A good argument can be made that this situation is unfair and that Puerto Rico should properly become a state of the union or be granted independence. But despite the fact that American possession of Puerto Rico does not have the legitimacy, or the historical or security justification that Israel’s control of Judea and Samaria does, there isn’t worldwide outrage against the ‘apartheid’ US for refusing to grant Puerto Ricans their full rights.

I think this illustrates several things. One is that a political structure that is less than a sovereign state, in which the inhabitants have fewer rights than they would in such a state, can exist without being a moral abomination. And it also shows the absurdity of the idea that the Palestinian Arabs should be granted more rights than, for example, Puerto Ricans because they are unapologetically committed to violent terrorism.

Just another way to see that all the fuss is not about the lack of a Palestinian state, but rather the existence of a Jewish one.