How to meet ‘Palestinians’ 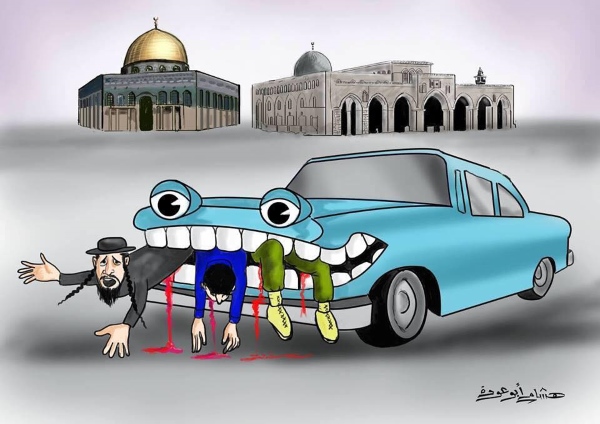 Palestinian social media cartoon encouraging vehicular homicide. Today there was yet another case of attempted murder by car. Luckily, several policewomen who were struck were only lightly injured — and when the driver tried to back over them, he was shot dead.

The trips Jewish groups organize for American politicians include more Christian holy sights than the ones they organize for their own members. But what they have in common is that Palestinians are talked about, yet rarely spoken to. Which means that politicians like Scott Walker return to the United States thinking they know something about Palestinians when, in important ways, they know less than when they left.

Maybe I can help him learn more. What have ‘Palestinians’ been up to lately? Here is some data (slightly abridged) from the Meir Amit Intelligence and Terrorism Information Center:

During the past year there has been an increase in the number of vehicular attacks carried out in Judea, Samaria and Jerusalem, and they have become a frequent modus operandi of the campaign the PA and Fatah call the “popular resistance.” The campaign takes many forms, including the throwing of Molotov cocktails, rocks and stones, and stabbing and vehicular attacks. It enjoys the support of the PA and Fatah (See below). Vehicular attacks are encouraged and supported by Fatah. Senior PA figures also regard them as legitimate attacks within the so-called “popular resistance.” They do not condemn the attacks, and give the perpetrators moral and political support. They consistently accuse Israel of responsibility for the situation and blame it for “escalation.” Hamas and the other terrorist organizations also glorify the vehicular attacks and their perpetrators, and call for more anti-Israeli terrorism. They urge the so-called “popular resistance” be turned into a military campaign, the so-called “third intifada.” The violence within the “popular resistance” continues despite the ongoing preventive activities taken by the PA’s security forces and its security coordination with Israel.

In other words, for our peace partner pals, murder by car (like murder by firebomb, murder by stoning and even murder by knife) doesn’t count as terrorism. It is “popular resistance,” which is apparently unobjectionable.

So the advice I have for Gov. Walker is this: be very careful crossing the street in Jerusalem, unless you really want to meet some ‘Palestinians’.