There’s only one issue in Israel’s election

Posted on February 19, 2015 by Victor Rosenthal

Our election campaign stumbles on. One could laugh if one could keep from crying when Mrs. Netanyahu’s recycling of deposit bottles or whether it was legal for the Netanyahus to hire an electrician who was also a Likud activist are presented as issues.

The Left is going after young secular voters, apparently an important swing segment of the electorate (another is Arabs, whose participation in elections has historically been lower than that of Jews). Naftali Bennett of the right-wing Bayit Hayehudi party was making inroads in the young secular segment even though most of his list was composed of older religious people. The Left needed an issue, and they chose a good one: gay marriage. 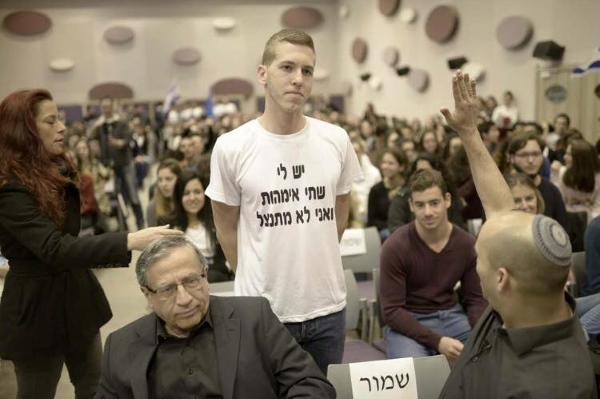 A recent campaign commercial for one of the leftwing parties showed members of Bayit Hayehudi answering — mostly in the negative — the question of whether they support gay marriage. Bennett has used “I don’t apologize” (for Zionism, for Israel’s economic success, for building in the territories, etc.) as a slogan, so not apologizing for supporting gay rights, including marriage, is clever.

But as an election issue, it is ridiculous. As long as marriage in Israel is under the control of religious authorities, not only will there be no gay marriage but even heterosexual marriage for Jewish couples who can’t produce the documentation required by the Rabbinate — and this pretty much means all immigrants — will continue to be difficult. Neither the Right nor the Left is in a position to change this, unfortunately.

I’ve personally experienced the randomness, incompetence and infuriating condescension of the Rabbinate when my Jewish and heterosexual daughter was married. But even if there was a likelihood that a civil marriage bill could be passed, this would not be an issue for me.

Because there is only one — there can be only one — issue for Israeli voters today, and that is security. Israel is surrounded by enemies, some of whom are very well-armed. Iran, whose leaders constantly reiterate that Israel will be destroyed, is building nuclear weapons, and the US — the only power that could stabilize the region — seems prepared to let this happen.

There is absolutely no doubt that Israel will confront Iran, Hizballah, Hamas and who knows whom else in the near future. It’s not a possibility, it’s a certainty. They aren’t going to go away, give up or suddenly decide to make peace with us.

So to the young man with two mothers, I have this to say: yes, you shouldn’t apologize for your support for gay rights, but you don’t live in Berkeley, California. You live in the Middle East, at a time of historic upheavals. Gay rights, the cost of food or an apartment, the education budget — things that are significant in a normal country in a normal time — are not important here and now. Neither are deposit bottles and Likudnik electricians.

When you go to vote, the question in your mind ought to be about one single issue: who will best guide the state of Israel through one of the most militarily challenging periods of its existence. Who will have the best chance of successfully making a strategic plan and carrying it out so that the Jewish state will emerge victorious and whole from the coming struggle.