What it will take to preserve civilization

Posted on January 8, 2015 by Victor Rosenthal 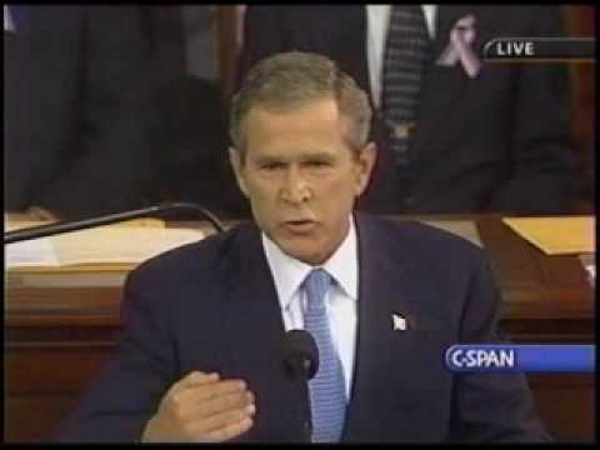 President George W. Bush speaks to Congress, Sept. 20, 2001. He said the right things, but failed to do them.

Yesterday’s post may have exhibited some frustration on my part.

As well it might! Since at least 2001 the Western world has been in a life-and-death struggle with the movement that brought us yesterday’s bloodbath in Paris, as well as countless less publicized atrocities (less publicized because they took place in Nigeria, Iraq or Syria to people the West doesn’t care about as much, although they were often worse). Despite everything, there is still no unified effort to fight back in the name of civilization.

President Bush made all the right noises after 9/11. On Sept. 21, he addressed a joint session of Congress, saying in part,

We will direct every resource at our command — every means of diplomacy, every tool of intelligence, every instrument of law enforcement, every financial influence, and every necessary weapon of war — to the destruction and to the defeat of the global terror network. …

We will starve terrorists of funding, turn them one against another, drive them from place to place until there is no refuge or no rest.

And we will pursue nations that provide aid or safe haven to terrorism. Every nation in every region now has a decision to make: Either you are with us or you are with the terrorists.

From this day forward, any nation that continues to harbor or support terrorism will be regarded by the United States as a hostile regime. …

We ask every nation to join us.

We will ask and we will need the help of police forces, intelligence service and banking systems around the world. …

Unfortunately, the US didn’t do what Bush promised. Bush’s coalition didn’t catch Bin Laden in Afghanistan and then unnecessarily invaded Iraq, compounding the error by taking the country apart and handing it over to the Shiite militias, strengthening Iran and provoking the vicious civil war that gave birth to Da’esh, the “Islamic State.” Its counter-terrorism activities focused narrowly on Al Qaeda, ignoring the greater (albeit longer-range) threats from Iran and Hizballah. Resources were squandered on “homeland security” that was meaningless.

And then came Obama, who took the side of the Islamic radicals of the Muslim Brotherhood in Egypt, tried to form an alliance with Iran (in pursuit of which he is permitting the regime to acquire nuclear weapons), allowed himself to be deterred from following through on his threats against mass-murderer Bashar al-Assad, and carried out a consistent policy to create a terrorist state next to Israel’s population centers. Israel, the strongest force standing against the jihad in the region!

In the meantime, a form of Orwellian doublespeak has been enforced in America, where it has been made unacceptable to speak about the Islamic roots of the terrorism that is daily killing dozens of people around the globe. Political correctness is more important than a straight answer, and official pronouncements seem to be made underwater.

Most of those 1.5 million Muslims don’t care about ideology or politics, or even much about religion. Most of them live barely above the subsistence level, and others who have better lives aren’t interested in losing them. Radical Islam is not a grassroots movement, despite what their leaders would like us to think. Jihadists are assembled, paid, equipped and led by governments, organizations of all kinds, and elites.

What we, the civilized world, needs to do is to focus. To learn to understand the nature of the beast that we are confronting. To chart the organizations that support it, name the leaders, determine the governments and factions that provide its nourishment. And then we have to crush those organizations, kill the leaders and elites, and overthrow those governments.

This would require an allocation of resources up front, in the intelligence phase. There would have to be unprecedented agreement between the targets of the jihad, an ability to work together despite their differences (think of the Allies in WWII). There would have to be a unity of purpose, an understanding of what has to be done and why.

I am pessimistic that the unity of purpose can be found. Europe is still committed to the ideal of multiculturalism that is eating its heart out while it pretends that nothing is the matter, like the Spartan boy who stole the fox. America is immeasurably weaker today than it was in 2001, thanks to Bush’s bumbling and Obama’s ignorance and ideological obtuseness.

In addition, it would take a leader, someone like Winston Churchill, someone who could take the very hard decisions that would be needed while still retaining the vision of justice, tolerance, freedom and openness that characterize the ideal Western society that is, after all, the ultimate goal.

Probably the leadership will have to come from America, despite its weaknesses and despite the ideological drift toward a European-like impotence. I must admit that I don’t see it on the horizon.

It would be a struggle, but — by orders of magnitude — nothing like the struggle to defeat the Axis in WWII. Even so, I don’t know if the West has the fortitude for it.

I will be watching with vital interest from here, the front line in the war.

5 Responses to What it will take to preserve civilization