‘Palestinians’ and Turks go to France — to honor terrorists? 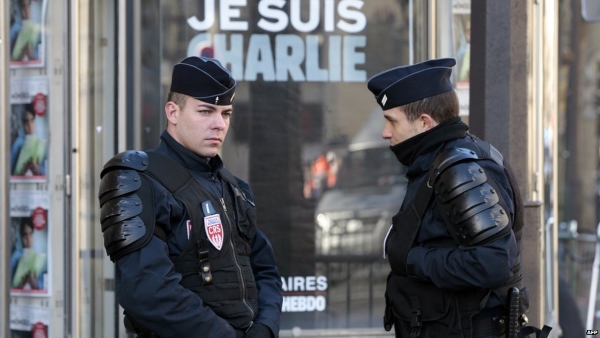 French police officers at rally site in Paris. BBC reports that about 2000 police and 1350 soldiers will be present for the massive rally that will be held today.

Palestinian Authority President Mahmoud Abbas will attend a mass national rally in Paris on Sunday to pay tribute to the 17 victims of Islamist attacks there this week, including four people killed at a Jewish supermarket, a diplomatic source said.

Abbas will be joined by many world leaders, including Israeli Prime Minister Benjamin Netanyahu, at the rally which is expected to draw more than a million people.

Ahead of the rally, Abbas is slated to meet with French President Francois Hollande. …

The hypocrisy, cynicism and sheer reality inversion that the ‘Palestinian’ leader is capable of is beyond belief, not to mention inducing nausea at a time like this.

To whom will Abbas pay tribute? Certainly not the Charlie Hebdo victims, since there is no press freedom in the Palestinian Authority, where one can be jailed for ‘liking’ a Facebook post or insulting the President.

And it’s unlikely that he wishes to honor the Jewish victims of the attack on the kosher market, because he regularly treats the terrorist murderers of Jews in Israel as heroes of the Palestinian movement and pays them generously.

So he must be going to honor the dead terrorists. There’s simply no other possibility, unless of course he wants an opportunity to thank Hollande for his vote at the UN Security Council to trash previous UNSC (242, etc.) resolutions and international treaties (Oslo). That favor certainly improved Franco-Islamic relations, didn’t it, M. Hollande?

It is also absurd that Turkey, which supports Hamas, provides sanctuary for its terrorist operatives (including the planner of the kidnap/murder of three Jewish teens in July), and may soon become the headquarters of its leader Khaled Meshaal, should pretend to show solidarity with terror victims.

Turkey is also a difficult neighborhood for journalists, where dozens were harassed, assaulted or fired for coverage of anti-regime demonstrations or corruption.

Abbas and Davutoglu will be in good company, though. The anti-Jewish French ‘comedian’ Dieudonné M’bala M’bala has announced that he, too, will be present.

2 Responses to ‘Palestinians’ and Turks go to France — to honor terrorists?