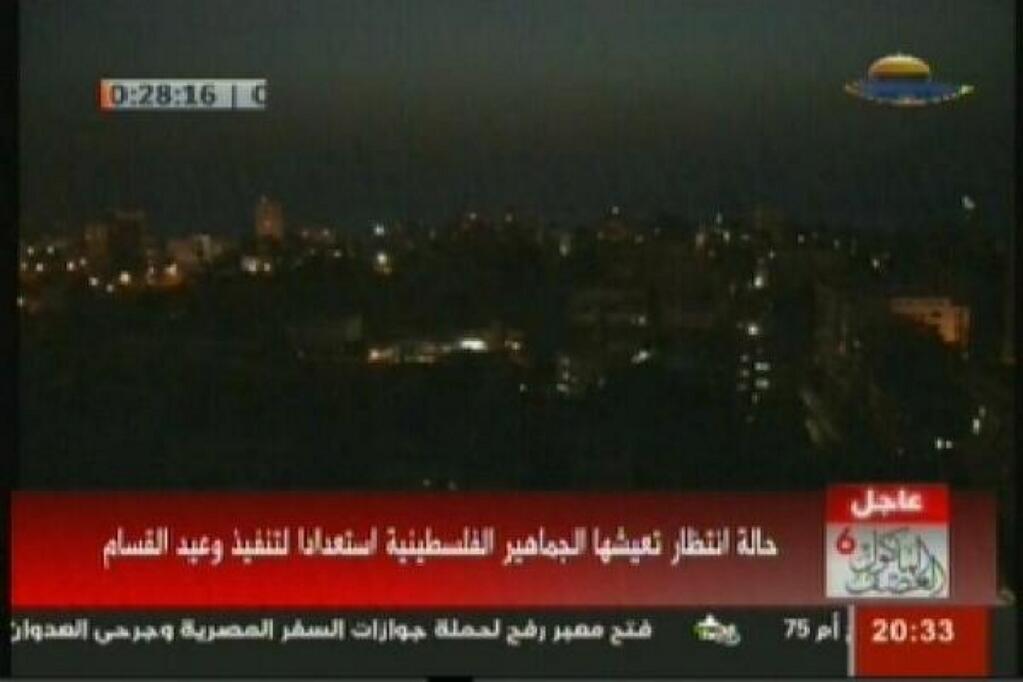 As I write, Hamas TV is displaying a count-down timer to a promised massive barrage of more-powerful rockets (called J-80’s) against Tel Aviv. It will begin in about 5 minutes from now, at 9 PM Israel time.

As hostilities between the Hamas ruled Gaza Strip and Israel continued on day 5 of Israel’s Operation Protective Edge, talk of an emerging formula for a ceasefire began to be heard.

Various Arabic media outlets reported on Saturday that the ceasefire was being devised at the initiative of the Palestinians with Egypt and Qatar’s involvement, according to a Channel Two report. …

Reports differed on what would be included in a ceasefire agreement but some claimed it would include the release of Palestinian prisoners, opening the crossings into Gaza, and transferring funds to Gaza, Channel Two reported. …

Any Israeli who could seriously consider a cease-fire now is simply insane.

Israel was viciously attacked by a racist, genocidal enemy. She is successfully defending herself, and will break the enemy’s back if allowed to continue. The appropriate strategy for Israel is to intensify the air campaign — and if this requires looser strictures about collateral damage in order to more fully achieve the objective of castrating Hamas, so be it — and probably to launch a ground incursion. Hamas leaders should not be off-limits, either.

The description of the cease-fire terms is beyond ludicrous. These are terms of surrender for Israel. Normally, it’s the loser that surrenders.

As I write this, it’s after 9 PM in Israel and Hamas has launched its massive barrage of rockets at Tel Aviv, Jerusalem, and other cities, most of which are being intercepted by Iron Dome or missing their targets. It is as if Hamas is begging to be hit harder.

Their strategy is hard to understand. Caroline Glick suggested that after its estrangement from Egypt and Syria, Hamas is making a bid for wider Arab/Muslim world support by being at war with Israel, traditionally an effective ploy. Keep in mind that Arabic language media — and some in other languages as well — are ‘reporting’ massive casualties in Gaza, and displaying pictures of dead children (in many cases, children from Syria, Iraq, Libya, etc.) allegedly killed by Israel. But it is not clear that the Arab world is prepared to go to the mat for Hamas this time.

Regardless, it seems to me that it has gone far beyond the point that Israel can accept anything less than what amounts to be the complete destruction of Hamas’ capability to make war. The economic and human costs of going to war every two years are enormous: every time Iron Dome takes out an incoming rocket, it fires two tamir interceptors, at a cost of about $10,000 each. And there is the cost of the reserve call-ups, the lost productivity, the damage when rockets do hit something, etc.

It is important that the termination of this conflict be a clear Israeli victory, both materially and psychologically. Hamas should come out of it without rockets or tunnels, humiliated, a laughingstock. The conflict will never be over — there will be new enemies, they are gathering strength even now — but Hamas will join all the other historical enemies of the Jewish people in oblivion.

I’m finished writing, and Hamas’ bragged-about rocket barrage is finished too, with no direct hits (except in Ramallah and Beit Lechem, where they managed to hit their own people). The Iron Dome performed remarkably well. The IDF Spokesperson is reporting that the launcher used to fire the rockets at Tel Aviv has been hit.

But the message was received in Jerusalem: a ground attack will be required. A cease-fire can wait.

2 Responses to Cease-fire talk, and a failed rocket barrage