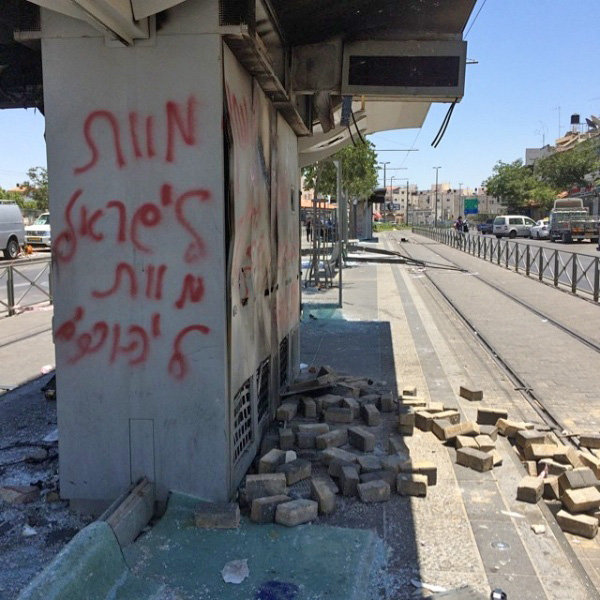 It looks from here like a really bad weekend in Israel. Some 40-odd rockets were fired from Gaza at southern Israel within 48 hours, as far as Beersheva. Arabs rioted throughout the country, throwing rocks and firebombs at any available Jewish target. They systematically destroyed the light rail tracks, stations and equipment in Arab neighborhoods of Jerusalem, which were supposedly a symbol of coexistence in the capital.

The murderers of the three Jewish boys are still at large, and — oh yes — the police have made arrests in the case of Muhammad Abu Khdeir, the Arab boy who had gasoline poured over him, and was burned alive. The three suspects are Jews. No further details have been released as yet.

The cold-blooded depravity of this crime makes it stand out, even in the context of the Jewish-Arab conflict. I would happily put a noose on the necks of the killers myself (I would feel this way whether they were Jews or Arabs). The fact — assuming that it is determined that they are guilty — that Jews did this is shocking.

If they are convicted, they will rot in prison. There will be no prisoner exchanges, and they will not be considered heroes. Soccer fields will not be named after them, and the Israeli government won’t pay them and their families a ‘salary’ for their service to the state. The Jewish people will spit them out in shame.

There are many differences between the way we will respond to this terrorist crime and the way Arabs respond to acts of terrorism committed by Arabs. I am not in the mood to write about that now, just to express my sorrow to Abu Khdeir’s family.

3 Responses to A very bad weekend