Just shut it down 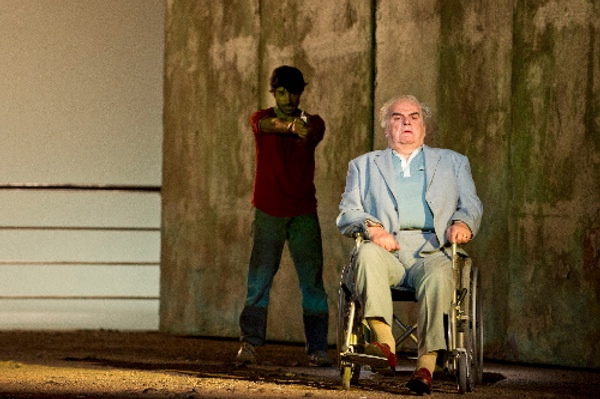 A scene from a British production of “The Death of Klinghoffer”

Many of the challenges facing the Jewish people in today’s world don’t have simple solutions. Should Israel insist on realizing its full rights under international law to all the land of Israel, or should it sacrifice part of its historic homeland for a promise of peace? If it chooses to annex all or part of Judea and Samaria, could it absorb the Arab residents without destabilizing the country? Should Israel invade Gaza and crush Hamas? If you are a Jewish resident of France, how long should you wait before making aliyah? These are hard questions without easy answers.

I think about these things often. But sometimes an issue arises for which the response demanded is clear.

The Metropolitan Opera in New York is scheduled to present the John Adams opera “The Death of Klinghoffer” in November. Myron Kaplan of CAMERA wrote to the Met’s manager, Peter Gelb (the whole letter is worth reading):

This story line can be characterized fairly as “Understandably aggrieved Palestinian Arabs wreak vengeance on disabled Jew standing in for all his perfidious co-religionists.” This is an obscene inversion of the reality that was the Achille Lauro cruise ship hijacking and subsequent terrorist murder of passenger Leon Klinghoffer. In this regard, it must be noted that the librettist, Alice Goodman, during the writing of the opera rejected her American Jewish heritage by joining the Anglican Church, the leadership of which is known for its hostility toward Israel. Goodman is now a parish priest in England.

As alluded to above, the opera is based on the 1985 murder of a helpless 69-year-old American Jewish man, Leon Klinghoffer, confined to a wheelchair—shot in the head while vacationing with his wife on a cruise ship in the Mediterranean Sea. He was murdered by Palestinian Arab hijackers belonging to the Palestine Liberation Front, a component of Yasser Arafat’s Palestine Liberation Organization, and his body dumped into the water. The choice of the title, “The Death of Klinghoffer” and not “The Murder of Klinghoffer,” signals the work’s moral evasion and misrepresentation. In a sense, it is consistent with the PLO’s initial comments on the murder, that either Klinghoffer had died of natural causes or his wife pushed him overboard to be able to claim life insurance. The title’s sanitizing of murder is, however, also consistent with the opera’s anti-Jewish tone. Instead of properly characterizing the Palestinian hijackers of the cruise ship as permanent prisoners of their own rage originating from cultural indoctrination, Adams/Goodman impart idealism to them.

Repeatedly, the Palestinians are portrayed as humane idealists. Hijacker Molqi sings: “We are—Soldiers fighting a war—We are not criminals—And we are not vandals—But men of ideals.”

The lies and distortions inherent in the opera constitute an attack by our enemies in the ongoing information war to delegitimize Israel and demonize the Jewish people. It is a work of propaganda, and another step in the mainstreaming of what was previously considered extreme and unacceptable. So what to do? Steven Plaut puts it into perspective:

Friends I need your help. I have written a new Opera and I need you to help demand that the Metropolitan Opera in New York stage it. It is an opera about the lynching of black people in Alabama and Mississippi by the Ku Klux Klan. The opera presents the moral ambiguity of the struggle for self-determination of the Klan members against the harsh and cruel behavior of the pickaninnies. The opera is careful not to pick sides and it presents both sides with musical delight. After the Klansters lynch the darkies, they take off their hoods and paint themselves as minstrel singers to show their common humanity with the dead. I am sure you agree that this is a must performance that the Metropolitan Opera needs to stage! Write the Opera chairman today!

Ask yourselves “What would Al Sharpton do?” The answer is obvious.

There are about 1.5 million Jews living in the New York metropolitan area. If one out of a hundred of them joined a demonstration at the Met, there would be no performance. Surely New York’s Jewish community could manage this.

I repeat: there are hard problems, but this is an easy one. Just shut it down.

This entry was posted in American Jews, Jew Hatred, Terrorism. Bookmark the permalink.

2 Responses to Just shut it down