Who shot them? (Updated)

Were two Palestinian teenagers shot to death in cold blood by Israeli soldiers on May 15, nakba day?

Palestinians say that video evidence shows that two youths were shot far from any action, when they were not threatening soldiers or Border Patrol officers in any way. This is in effect an accusation of murder.

While we don’t know (yet) for certain what did happen, it seems clear that the Israelis that were accused of shooting them did not do so — and most likely they were not shot with an Israeli military weapon.

There are two videos in question. One is taken by security cameras at a nearby business, and another was taken by a Palestinian cameraman working for CNN, Kareem Khadder.

The security camera footage shows two Palestinians falling to the ground (about 73 minutes apart). It does not show their faces. The first one is Nadeem Nouwareh (also called Nadeem Abu Qaraa in some reports).

Nouwareh, who is supposed to have been hit in the chest, falls forward and puts his hands out to break his fall. Experts say that this is unlikely, that someone hit in the chest with a high-powered bullet will normally be pushed back by the force of the bullet.

The Khadder video shows a nearby Israeli position. The camera shows one of the Border Patrol officers firing and then quickly pans to the location of the Palestinians, where they are seen rushing to pick someone up and put him in an ambulance. It does not show either of the two being hit.

The weapon used by the Border Patrol officer has a rubber-bullet cassette clearly visible on the barrel. The cassette holds the rubber bullets, which are propelled by firing blanks from the rifle’s normal magazine.

While it is possible to fire live ammunition with the cassette in place, the sound of the shot is quite different, and would have been noticed by everyone at the post. Unless there was a conspiracy including all the Israelis present, this did not happen.

CNN’s broadcast includes an interview with Nouwareh’s father, who displays a bullet he says was found in Nadeem’s backpack after it passed through his body.

The spent bullet that is displayed looks like a 5.56 mm bullet of the type that is used by Israel (and also by the weapons supplied to the Palestinian security forces by the US). Bullets like this can be picked up at firing ranges around the country.

The bullet, which supposedly penetrated Nouwareh’s chest, exited his back, and then was stopped by a hard object (like a book) in the backpack, is only slightly deformed. An expert interviewed by Israel’s Channel 2 — and another that I spoke to — both said that it was certain that under these circumstances it would have been crushed almost flat.

The backpack has a small hole and a small bloodstain on it. Inside, the father displays a book that appears to have a red substance wiped across it. I can’t see how the bullet would have carried that much blood inside, or why it would be smeared across the page.

The second victim is Mohammad Odeh Salameh (initial reports gave his name as Mohammad Mahmoud Odeh Abu Daher), said to be hit in the back with the bullet exiting his chest. In the poor quality security video, he appears to be hit, falls to his knees, and then rolls over. The CNN broadcast shows a still picture of him on the ground, apparently after the shooting, taken by Palestinian photographer Atef Safadi. Here is a screen capture from about 2:48 into the broadcast: 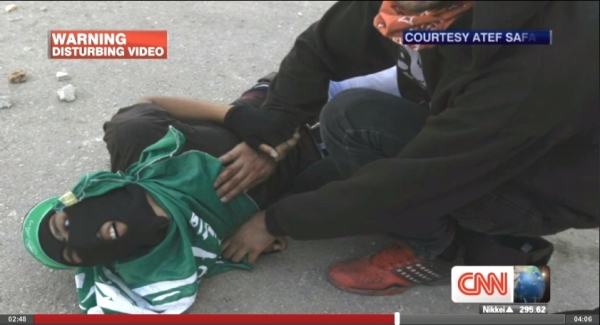 Atef Safadi photo of Mohammad Odeh Salameh on the ground

This photo corresponds to the point 1:45 into the security video when the photographers rushed up to take pictures. The person in dark clothes is the first one to reach Salameh, possibly a doctor. He is seen throwing down a black bag and then kneeling. He appears to move Salameh around, feeling his chest and back, possibly searching for wounds. Absolutely no blood is seen anywhere.

Another Safadi picture (not in the CNN broadcast) shows Salameh a moment later. There is still no blood visible on his clothes or the hand of the man in dark clothes, who is apparently holding it over the exit wound: 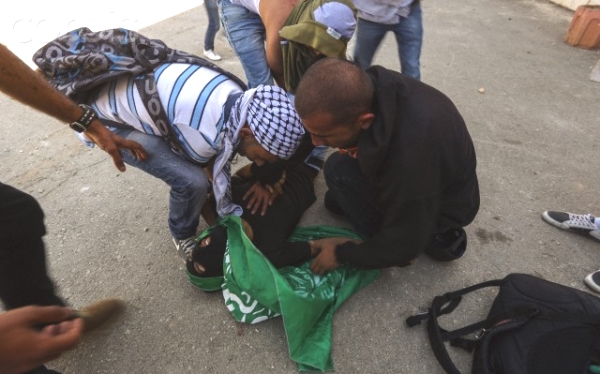 Photo of Salameh a few moments later. Still no blood.

The 5.56 mm bullet of the type used in the Israeli weapons visible in the Khadder video has a tendency to tumble and fragment in the body, especially if it hits bone, as is likely if it passes through the chest either from the front or the back. It would make a small entry hole, an expanding wound channel and a large (several inches) exit wound. Bleeding would be profuse, and a large amount of force would be transferred to the body, knocking it away from the direction of impact. None of this was visible in either case.

A photographer interviewed by Ha’aretz adds more complexity to the story:

“Some of the troops, mostly Border Police, took position in a high building overlooking the road, some 50-to-60 meters away [these are the ones in the CNN video -ed.]. Another group was in the prison parking lot, and they were even farther away, more than 150 meters away,” he said.

Momani said that during the demonstration, dozens of youngsters hurled rocks at the troops, who retaliated with rubber bullets and smoke grenades. “The youths were hit when things had calmed down. That’s why I and my colleagues were sitting in the shade, rather than standing at the scene. We felt the incident was winding down. There were a few dozen boys still at the site, most of them school students,” he said.

Momani said the photographers can distinguish rubber bullets from live fire. Throughout the incident, the soldiers shot rubber bullets, but “the live bullets came in isolated shots,” he said.

“We heard the shots well, but I can’t say if they came from the troops in the building or the other group. But there’s no doubt that during the shooting, there was no confrontation, and the youths did not approach the soldiers,” he said.

The security video could be a ‘Pallywood’ production like the al-Durah hoax in which no one was actually killed. At first, I suspected that two different Palestinians were killed that day, in direct confrontation with the IDF, perhaps throwing firebombs, and the video was an attempt to prove that two teens had been shot for no reason. But the IDF did not report any such incident and insists that no live ammunition was used anywhere that day.

There was a funeral, and apparently two Palestinians were buried. The first still photo taken by Atef Safadi appears (despite the ski mask) to at least superficially resemble the one of Salameh taken at the funeral (he is the one in the back, draped with the green Hamas flag). The still seems to fit well with the security video. The original photo should be examined carefully by experts, but it appears not to be photoshopped.

So I conclude that the security video probably does show at least one Palestinian who was killed. But who shot him, and when?

The fact that 1) live fire at the Israeli post would have been immediately noticed (and the shooter arrested for a serious violation of rules of engagement and probably charged with murder), as well as 2) the way the victims fell when hit, and 3) the lack of any signs of blood or an exit wound on either of them, all argue that they were not shot with live ammunition by the soldiers at the post.

Were they shot by a sniper at another location, Israeli or Palestinian? Who were the “other group” photographer al-Momani referred to? If they were “at least 150 meters away” it would be hard to tell. Autopsy data about the direction of the wounds combined with the security video might clear this up, as well as the type of weapon used.

If the shooters were Palestinians, that would imply that Palestinians are monsters. But isn’t that what they are saying about us?

Update [26 May 2014 0956 PDT]: See Elder of Ziyon’s analysis here. He argues that Nouwareh’s fall was consistent with being hit in the leg with a rubber bullet, there is a mark on his right pant leg that could have been caused by such a bullet, and that the timing was right when compared to the CNN footage of rubber bullets being shot from the Border Patrol position. One expert that I spoke to also said that the way his right leg stiffened when he fell was characteristic of someone hit in the leg by a rubber bullet.

Elder of Ziyon sums up thus:

Now, what happened afterwards? I have no idea. If I am right – and I am convinced I am, at least in Nawarah’s case – then you have no choice but to say that either he was shot after this incident in the chest, or another dead body was buried, and either this isn’t Nawarah or that other person isn’t Nawarah.

Update [28 May 2014 2220 PDT]: Elder of Ziyon analyzes new footage which very persuasively points to an orchestrated ‘Pallywood’ production. All the facts aren’t in yet — we still don’t know who, if anyone, was killed — but the latest information is here.