The only thing J Street got right

I have just returned from a showing of the film The J Street Challenge: The Seductive Allure of Peace in our time. If you haven’t seen it, you should. Here is the trailer:

The film made a lot of good points about J Street’s ideology (“they couldn’t sell their ideas in Israel, so they imported them into America”), the psychology of its appeal, especially to young Jews, and its dishonesty. I’ve written quite a lot about J Street in FresnoZionism.

I live (until the beginning of August, when my wife and I return to Israel after 26 years) in a metropolitan area of about 500,000 people, in which there are fewer than 1000 Jewish families. I am used to being told that I’m the first Jew someone has met, although I never offer to let them touch my horns.

You have no idea what ‘apathetic about Jewish issues’ means until you have seen my town. There is a Reform temple of about 350 families, a Conservative shul with about 40, and a smallish Chabad house. When I first suggested that the local Jewish Federation should show the film, several people asked me “what’s J Street?”

I first asked the Reform rabbi if we could have the showing at his temple, since it is the biggest facility. He declined because he thought it would be ‘divisive’ and because he disagreed with its message (that J Street is an anti-Israel wolf in pro-Israel sheep’s clothing). I asked him if he would take part in the panel discussion after the film as a defender of J Street, but again he demurred, saying that he would do nothing to help with this project. At first, he didn’t even want us to leave flyers for the event at the temple, but he quickly backtracked — after all, the temple had never refused to publicize a Federation event before.

This soon became known (and the polite and respectful discussions we had on the subject presented as altercations), so it became The Film the Rabbi Doesn’t Want You to See. This probably significantly boosted the attendance when we showed it today at the Conservative synagogue.

I was not exactly surprised, but it was depressing to note that of the 70 or so people attending — it was publicized heavily, including a direct mailing to 500 families — close to 90% were over the age of 65, and possibly one or two were under 50. College-age kids and young families were entirely missing — more or less proving J Street’s point that the concerns of the Jewish establishment (that’s us) are not their concerns.

After the film we had a panel discussion featuring me vs. a guy trying to defend J Street. The discussion was surprisingly animated, with most of those present opposing J Street. But this wasn’t the audience that needed to have it.

My wife is resigning from Hadassah, sending back her pins after decades of membership and several terms each as treasurer and president of her chapter. The precipitating factors seem to have been the change in Hadassah from a grass-roots movement of Zionist women into a slick professionally-managed fundraising organization which nevertheless managed to lose $90 million to Bernie Madoff. They should have known better, and so should Sheryl Weinstein, Hadassah’s chief financial officer who had an affair with Bernie while they were investing with him. 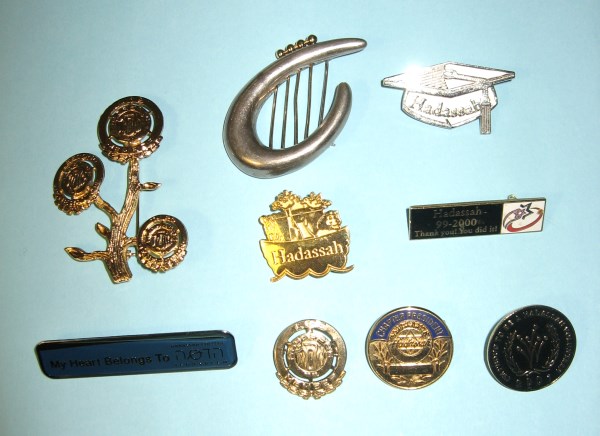 Lise’s Hadassah pins that she will be returning. Some are for donations, some for service.

But the straws that broke the camel’s back were a new mission statement that doesn’t contain the word ‘Zionism’, and Hadassah’s vote in favor of J Street’s membership in the Conference of Presidents of Major Jewish Organizations.

J Street and Co. continue to say that the Jewish Establishment has lost its way. They may be wrong about everything else, but they got that one right.