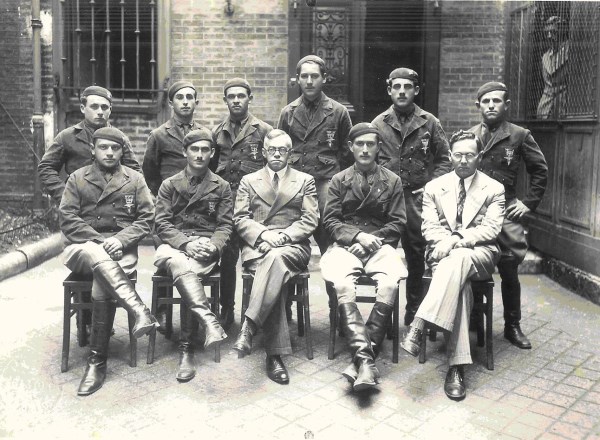 Ze’ev Jabotinsky (front row, center) with a group of Betar motorcyclists in Paris (1934)

An Israeli news station has reported this morning on a poll conducted by Professor Sammy Smooha of Haifa University showing that the acceptance of Israel by Israeli Arabs increased markedly between 2012 and 2013.

Among the specific results reported were that the percentage of Israeli Arabs who accepted Israel’s right to exist as a Jewish and democratic state rose to 52.8% from 47.4% the year before. There was a more pronounced rise in the percentage of Israeli Arabs who believe that Israel can exist as a Jewish majority state to 43.1% up  from 29.6% a year earlier. The number of Israeli-Arabs who accept their identity as such without identifying as Palestinians increased from 32.5% in 2012 to 42.5% in 2013. In 2013, 63.5% of Israeli Arabs consider Israel to be a good place to live up from 58.5% in 2012.

I don’t think this is so surprising. Israeli Arabs have relatives in the area controlled by the Palestinian Authority, and they understand very well that it is characterized by nepotic corruption, arbitrary police power and gangsterism.

But we shouldn’t fool ourselves into thinking that these Arabs are Zionists. Many of them are well-educated professionals who are pragmatic in their politics, but when there are conflicts, like the intifadas, Operation Cast Lead (2008-9) or the almost-war with Hamas that happened in 2012, attitudes become more nationalistic.

In fact, the results of the survey quoted could have more to do with the bad relations in 2012 than the better ones of 2013.

There are also some hard-core supporters of Hamas or other anti-Israel organizations among the Arab citizens of Israel. And it seems that the rhetoric from Arab members of the Knesset has not moderated very much.

On the other hand, there are positive trends, like the glimmer of understanding on the part of some Christian Arabs that they are much better off aligning with their Jewish neighbors than their Muslim Arab ones. They can see how badly Islamists — in Egypt, Syria and Gaza for example — have treated Christians. Even under the secular PLO, the Christian population of the territories has declined sharply.

Good relations between Israeli Jews and the 20% of Israel’s citizens who are Arabs are critical for the survival of Israel as a Jewish state. But how do we define ‘good relations’?

Arab residents face a choice — should they continue to live as a national minority in Israel (or go to another Western country), where they will have civil rights, a great deal of freedom, and economic opportunity; or should they move to an Arab country (even Gaza or the PA) where they would be part of the cultural majority but lack rights, freedom and opportunity?

This is up to them. The one option that must be closed to them is to live in Israel and insist on a specifically ‘Palestinian’ national identity that includes — as it must — the commitment to regain ‘Palestine’ (which, in fact, they never had) from the Jews.

Meir Kahane believed that coexistence on the same land was simply impossible. But Jabotinsky had a different view:

As long as the Arabs feel that there is the least hope of getting rid of us, they will refuse to give up this hope in return for either kind words or for bread and butter, because they are not a rabble, but a living people. And when a living people yields in matters of such a vital character it is only when there is no longer any hope of getting rid of us, because they can make no breach in the iron wall. Not till then will they drop their extremist leaders, whose watchword is “Never!”

And the leadership will pass to the moderate groups, who will approach us with a proposal that we should both agree to mutual concessions. Then we may expect them to discuss honestly practical questions, such as a guarantee against Arab displacement, or equal rights for Arab citizen, or Arab national integrity.

And when that happens, I am convinced that we Jews will be found ready to give them satisfactory guarantees, so that both peoples can live together in peace, like good neighbours.

This entry was posted in Israeli Arabs. Bookmark the permalink.