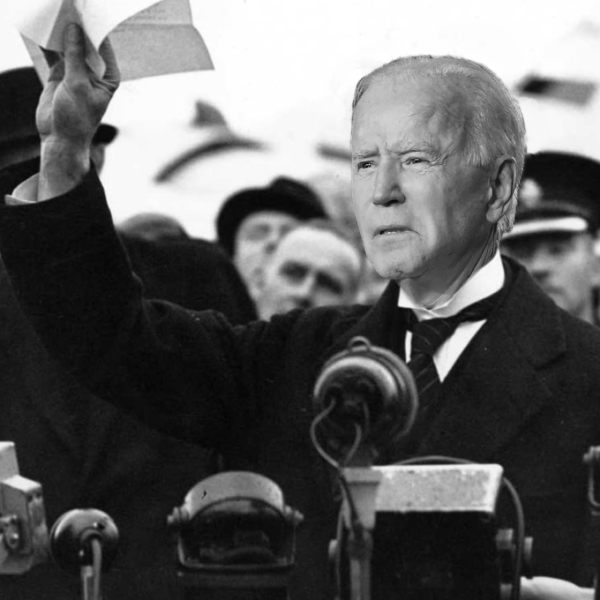 The negotiations between Iran and the West are free to continue after the hiccup caused by a Russian demand for a “right to free and full trade, economic and investment cooperation and military-technical cooperation.” Either the Russians got what they wanted, or they decided to accept something less; but in any event, the rush to sign an agreement that lifts sanctions on Iran is on again.

I think it’s safe to say that everybody – Americans, Iranians, Russians, Europeans, and certainly Israelis – knows that this agreement presents only a minor impediment (if any) to the deployment of nuclear weapons by Iran. In fact, it is a get out of jail free card for the violations of the Non-Proliferation Treaty of which Iran is guilty. It is primarily a device to lift virtually all sanctions on Iran – even those that are not related to nuclear weapons – and provide an immediate windfall of tens of billions of dollars to Iran, and only secondarily a limitation on nuclear weapons development.

Numerous Israeli officials from Prime Ministers to IDF Chiefs of Staff have sat down with the Americans and explained and documented why the agreement will not prevent or significantly slow Iran’s progress toward a weapon, and how the injection of cash into Iran’s struggling economy will be used to finance weapons development, proxy warfare against Israel and the Gulf states, and terrorism around the world – including the US. What isn’t clear about “death to America,” they asked?

The Americans listened politely, but did not change direction.

It’s obvious why the Iranians are anxious to make a deal, but what the US gets out of it is not certain. Yes, President Joe Biden can reverse a Trump policy, accuse the Republicans of failure, and declare “peace in our time” while waving the new, even worse, version of Obama’s JCPOA. But I think that the main motivation is to continue a policy, going back to the 1970s, to reverse the outcome of the 1967 war.

This policy was initially justified by the “realist” argument that American alignment with Israel was counterproductive, given the larger populations of her enemies, and their possession of critical resources. Later, after 9/11, it became fashionable to believe that US support for Israel was one of the causes of terrorism against the US (after all, Osama bin Laden said so), and that Syria and Iran could be bought off from supporting the insurgency in Iraq by forcing Israel to surrender the Golan Heights and create a Palestinian state in Judea/Samaria.

With the advent of President Barack Obama, the anti-Israel policy took another turn. Obama sees the Jewish state through a postcolonialist lens. He really does believe that Israel is a settler-colonialist oppressor of indigenous Palestinians, and accepts the Palestinian narrative of dispossession. He pays lip service to Israel’s right to exist, but adoption of his policies would quickly lead to her replacement by an Arab state. His heart is with the Palestinians, whom he sees as representatives of a black and brown third world, oppressed by “white, European” Israelis.

Biden’s policymakers are either former Obama Administration officials, or others with even more radically anti-Israel views. His administration tries to avoid the kind of direct confrontation that Obama seemed to enjoy, but its policies are no better. And one of the goals of the Iran deal is to weaken Israel, make her more dependent on the US for protection against an increasingly powerful Iran, and thus make it possible to continue the process of reducing Israel to her indefensible pre-1967 borders. And it isn’t unlikely that many of those involved would be happy to see the Jewish state gone entirely.

The immediate consequence of the implementation of a new Iran deal would very likely be regional war. There are two possibilities: either Iran will develop its conventional forces and those of its proxies (with or without a nuclear umbrella) to the point that the regime feels confident to unleash them against Israel; or Israel will find its nuclear red lines crossed and preemptively attack Iran. In either case, there would be – at least – involvement of Israel, Iran, Gaza, Lebanon, Syria, and the Palestinian Authority. Intervention by outside powers like Russia and the US is possible. Civilian casualties on all sides would be in the thousands, perhaps tens of thousands. The possibility that nuclear weapons will be used can’t be discounted.

Bret Stephens wrote that the invasion of Ukraine was facilitated by years of Western appeasement, and slaps on the wrist for Putin and other bad actors. After he was allowed to invade Crimea, Georgia, and Eastern Ukraine; after Syria was allowed to use chemical weapons on her own people and China to crush Hong Kong’s autonomy, asks Stephens, why should Putin think he wouldn’t get away with invading Ukraine?

Iran, too, has learned that only Israel is prepared to oppose its increasing aggression against its neighbors. Europe seems to have allowed the benefits of profitable trade with Iran to distract her from being in missile range of a revolutionary Islamic republic with nuclear weapons. The US seems to see no problem with a nuclear-armed Shiite caliphate stretching all the way to the Mediterranean, and controlling all the oil and gas in the Middle East. Why shouldn’t it continue to make agreements and violate them?

But suppose that Trump’s Maximum Pressure campaign had been continued under Biden (or a reelected Trump). Suppose that it had been expanded to a full-on international boycott of everything Iranian, like has been done to (the much stronger) Russia in the past few weeks. Suppose this were combined with a campaign of sabotage, cyberattacks, assistance to local dissidents, and pinpoint military operations – and then the regime were presented with an ultimatum, not an offer of appeasement. Would it have worked? I think so. It might even have been possible to topple the regime.

Is it too late now? I’m not sure. More importantly, though, there is no will in the West to do it, and certainly no desire on the part of the Biden Administration, “led” by its senile gasbag and actually directed by unknown forces.

There is very little that Israel can do to affect the behavior of the Western appeasers, just as Czechoslovakia had no options in 1938. What’s left is to prepare for the war that will certainly follow; to develop plans – I prefer preemption – to make it as short and decisive as possible. The worst possible approach, which I fear appeals to our government, is to try to obtain guarantees from the Americans that they will act in some way to protect us.

Just ask Ukraine how good their word is!

This entry was posted in Iran, US-Israel Relations, War. Bookmark the permalink.

2 Responses to The Czechoslovakian Option