Israel and the Pandemic

Is COVID-19 a blip or is it the apocalypse?

It seems to me that unless humans do something stupid, like start wars, it will be a blip (this post is based on statistical and other data on the pandemic from this site).

In many countries, it will be a vicious and tragic blip indeed, but the measures taken to reduce the damage have so far had far greater overall effects than the actual illnesses and deaths attributable to the virus. China, as of yesterday, had a total of about 3200 deaths, and the number of new cases dropped to only 13. 3200 is 0.00023% of China’s population. Obviously there will be more deaths, there may be additional waves of the disease, and other countries may not be able to or may not choose to take the draconian measures taken by China, including wide area lockdowns and millions of people in quarantine.

Italy, for example, already has 2500 deaths and almost 700 new cases as of yesterday. The number of deaths doubled in the past four days. It will get worse before it gets better. But still, it should be clear that this isn’t the Black Death, which killed 30% to 60% of Europe’s population in the 14th century.

Within a couple of years – unless the virus mutates especially rapidly or there are other unforeseen circumstances – most of the world’s population will have immunity, either from having had the disease or by vaccination. But until then, some models predict hundreds of thousands of deaths in countries like the US and UK, unless policies of social distancing and quarantine are adopted, like the ones that have been effective in China, South Korea, and Japan – and that we hope will work in Israel.

Israel has implemented drastic measures, including closing schools and daycare, which essentially paralyzes the economy. The police have already arrested several people for violating quarantine, and they have announced that they will soon begin handing out heavy fines to anyone violating the social distancing rules, such as congregating in groups larger than 10 people. It’s possible that the next step will be a total lockdown, almost a general curfew.

When the rules were first announced, many people felt that PM Netanyahu and his advisors in the Health Ministry were overreacting, but as the number of cases grows, most Israelis have come around to the idea that tough measures are needed.

One step that is still controversial (at least among anti-Bibi politicians) is to have the Shabak (General Security Service) make use of its sophisticated cellphone data collection system, usually employed only for terror suspects, to track the whereabouts of everyone who has been diagnosed with the virus. This information will be given to the Health Ministry, which will be able to warn everyone who has been close to a carrier to enter self-quarantine. There is already an app available that will take the information provided by the Health Ministry about the location of known patients, and cross-check it with your own movements, so you can be informed if you have crossed the path of one of them.

As I write (Wednesday morning) we have 427 diagnosed cases, and the authorities are adopting new testing procedures that should make that number climb rapidly. I expect that we are in for a difficult few weeks as those currently incubating the disease develop symptoms, because our healthcare system is severely underfunded and understaffed, and is running over capacity even without global pandemics.

But from a political and economic point of view, here is the single most important fact about the pandemic: 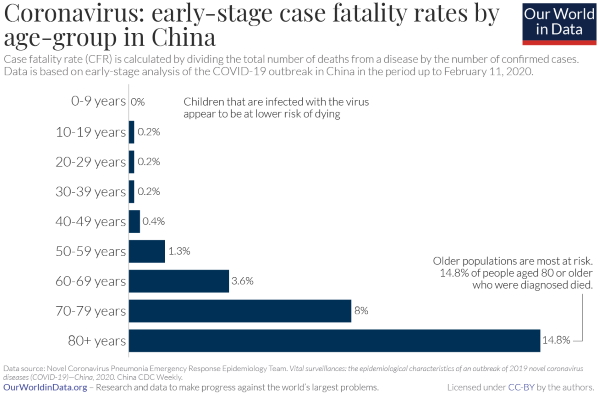 Unlike the Black Death, which was especially fatal to children and young people, this virus is far more deadly to the old. Even if millions die, they will not be the most economically important millions. This is not pleasant to contemplate for those of us who are in the most threatened age groups (I am 77), but it is a fact.

It is also the case that ruling elites in many countries are made up of older individuals. Iran, which has been particularly hard-hit by the virus is a good example, with its Supreme Leader Ali Khamenei 80 years old; it has lost several members of its parliament, an IRGC general, and other officials of various sorts. But Binyamin Netanyahu is 70, Donald Trump is 73, Joe Biden is 77, Bernie Sanders is 78, Narendra Modi is 69, and Angela Merkel is 65.

It’s interesting to speculate about how cultural attitudes influence the strategies being taken against the disease. We know that Israelis will go to any lengths to protect their children, including the ones who are already old enough to be in the army – what other country would release more than 1000 terrorists, many of them guilty of murder, in return for one young man? I often compare the way my grandchildren and their age-mates are being brought up to what I remember from my own youth in the USA: there is no comparison. Our parents loved us and did what they thought best for us, but they didn’t lavish the amount of attention, time, or other resources on us the way Israeli parents do today – both individually and as expressed by the cultural institutions they sustain. So does Israeli culture value its senior citizens as well? I think it does, although the children come first.

The strategy of social distancing and isolation is intended to prevent a collapse of the overstressed healthcare system, as occurred in northern Italy, where it has been reported that patients died because there weren’t enough ventilators available for those in respiratory failure. Since these patients are primarily (but not entirely) the older ones, adopting this strategy essentially protects the older population in return for accepting the economic losses that come from it.

Experts don’t want to predict how long it will be necessary to hunker down like this. Will it be only until the warm weather? Will it be until a vaccine is available, which may take a year or more? Will the relaxation of restrictions bring on new waves of illness? Nobody knows.

In some ways, Israel is in good shape to weather this pandemic. Israelis are resilient and creative, and are finding ways to work and study at home. Research is underway for vaccines and other forms of treatment or prevention. Israel has the ability to control its borders, so there is less worry about the introduction of infected individuals from abroad.

On the other hand, just as it is in our security situation, we don’t have a lot of room for mistakes: the healthcare system needed a big infusion of resources even before this happened. If there is a major source of concern about our ability to weather the crisis, this is it.

1 Response to Israel and the Pandemic