What’s in the future for American Jews

One of the favorite myths of American antisemites – of both the left and right – is that the Jews push America into wars for the sake of Israel, or for the sake of the Rothschild fortune*, or both. Take this newly-announced candidate for the US Congress, for example.

So President Trump’s recent tough talk about Iran is red meat for antisemites. Nevertheless, Trump is right to pressure Iran to end its nuclear program. If you are the US President, and a country that chants “Death to America” every day several times before breakfast is clearly developing nuclear weapons (despite a worthless “deal”), the rational thing to do is make them stop, right? How hard is this?

Trump is being accused of dragging America into war, and Israel – and by extension the Jews – are dragging trump. That is precisely the point of the hateful antisemitic cartoon that created such a furor when it appeared in the NY Times International Edition recently: 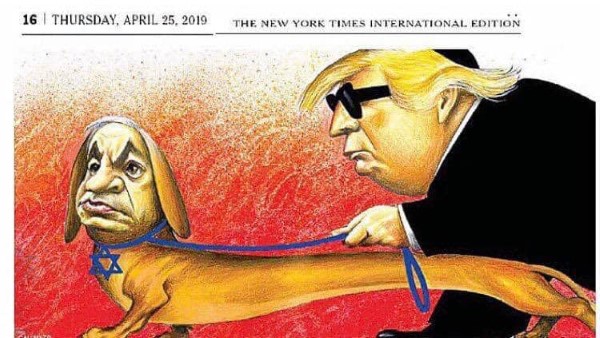 I am sure PM Netanyahu and a majority of Israelis, me included, would be happy to see the US destroy Iranian nuclear facilities. The US has the power to do it, and Israel would doubtless offer to help.

But this doesn’t imply that the US would be doing it on behalf of Israel, or even more so, on behalf of the Jews. The US, as a general rule – like other nations – does what it does to advance its interests. In this case American self-interest includes protecting itself and its allies, as well as preventing the rise of a hostile caliphate in the Near East, and keeping Iran from taking control of a big chunk of the world’s oil supply.

Saudi Arabia has as much or more influence in the US than Israel, and has had a “special relationship” with the US since February, 1945, when Franklin Roosevelt met King Abdul Aziz Ibn Saud on board a Navy destroyer in the Suez Canal. Indeed, when the Saudis went head-to-head with the vaunted “Israel lobby” over the sale of AWACS airborne warning and control systems aircraft to Saudi Arabia in 1981, Israel lost.

The Saudis, who are presently fighting Iran in a proxy war in Yemen, are perhaps even more worried about Iran than Israel is. But that is less interesting to those who want to blame the Jews.

A conflict with Iran could result in attacks on American bases in the region – there are more of these than you may think – or terrorism against the homeland. If this were to happen, there’s no doubt that it would be used as an excuse for anti-Jewish acts. It’s ironic that even those Jews that supported the Iran deal, hate Trump, and have no connection whatever to Israel, would find themselves targeted (ironic, yes, but it serves them right).

Most do not understand, yet, that every Jew is responsible for every other Jew, and that – as someone recently said – “when visibly Jewish people are victimized, then every Jewish person is victimized.” And finally, they almost never realize that, whatever they think about it, the Jewish state – not Brooklyn and not Los Angeles – is the center of the Jewish world.

But they will learn. Either the US will follow the courageous policy of the Trump Administration and confront and defeat its enemies (who are also the enemies of Western civilization overall), or it will return to the cowardly strategy of appeasement and obsequiousness of the previous administration.

Either way, the Jews will be in the middle and it will be hard for them. And they will either learn to stick together and fight against the antisemites, or they will save themselves by giving up their Jewishness, insofar as this will protect them (it didn’t during the Nazi period).

What’s changed in the last two millennia or so?
—————————————————–
* Full disclosure: My daughter is married to a Rothschild. They both work and are saving up to buy their own apartment. Apparently he is not one of those Rothschilds.

1 Response to What’s in the future for American Jews