Posted on February 15, 2019 by Victor Rosenthal 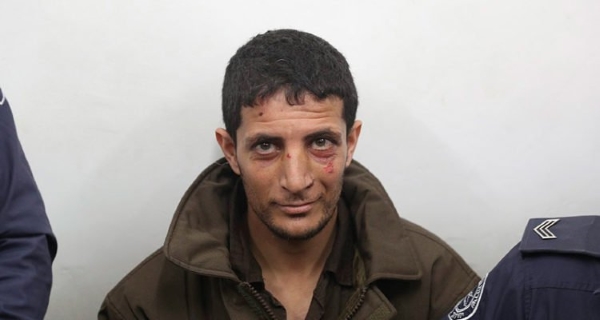 Arafat Irfaiya is the monster that raped, murdered and mutilated a beautiful 19-year old girl last week because she was a Jew living in Eretz Yisrael. He is guilty of crimes against the Jewish people, and he should be executed for them.

Military courts can impose a death penalty for crimes committed in the territories, but unfortunately the site of the murder was just inside the Green Line, so the trial will be in a civilian court.

The leniency shown by the Jewish state to murderers motivated by “nationalism” – Palestinian Arab Jew-hatred – is remarkable, including almost Scandinavian-style prison conditions, regular salaries paid by the Palestinian authority, and often early release as part of political deals or as blackmail for hostages.

This is stupid. The smiles often displayed by Palestinian Arab terrorists like Irfaiya as they are sentenced testify to the fact that they see themselves as victorious despite their conviction.

Keeping these creatures in prison is expensive, provides an incentive for hostage-taking – you may recall that in 2011 one Jewish soldier, Gilad Shalit, was exchanged for 1027 terrorists, many of whom were guilty of murder – and, thanks to the Palestinian Authority’s payment system and the adulation they receive in Palestinian society, probably encourages further terrorism rather than deterring it. When they are released, they often return to terrorism. In 2015 it was reported that six additional Israelis had been murdered by prisoners released in the Shalit deal.

Every time – and there have been many times – that a Palestinian Arab terrorist commits a particularly horrible murder, there are calls for the imposition of the death penalty. And every time, it doesn’t happen.

There are numerous objections to the death penalty in general. But in this case, and in most cases of Palestinian terrorism, they don’t apply. There is no doubt of Arafat Irfaiya’s guilt; there is physical evidence, including DNA, plus a confession and reenactment of the crime.

It is often said that the death penalty is not a deterrent, and this may be true in the West, especially in places like California, where the probability of a death sentence being carried out in a reasonable time is almost zero. In the Middle East, however, there are cultural factors that have the opposite effect. In our region, not executing a murderer is a sign of weakness, a signal that the victim’s family or tribe is too weak to preserve its honor. And a tribe without honor is a tribe whose members can be murdered with impunity. Failing to impose the death penalty actually has the opposite of a deterrent effect – it encourages murdering Jews.

Since 1967, Israel and the Jewish people have undergone a continuous loss of honor relative to their enemies, as they have made a series of unrequited concessions (starting with the surrender of sovereignty over the Temple Mount). With Oslo the pace of the concessions – and the concomitant terrorism against Israel – accelerated greatly, and there are beginning to be murmurs that still more is about to be expected of us.

If we wish to survive as a Jewish state, the pendulum must be forced to swing back the other way. I believe that a comprehensive policy to regain the initiative – and our honor – is needed. A small part of it would be to actually punish terrorists in proportion to their crimes. Executing Arafat Irfaiya would be a start.

But only a start. How did it come about that there are so many like Irfaiya? Why did two young Palestinian Arabs viciously slaughter five members of the Fogel family including a 3-month old baby girl?  Why did another Palestinian Arab teenager climb through a window and stab Hallel Yaffe Ariel to death in her bed? Why have there been hundreds of terror attacks against Jews by Palestinians in the past four years, many by perpetrators who are not known to be directly associated with traditional terrorist groups?

The answer is not complicated. When Israel invited Yasser Arafat back from exile and allowed the establishment of the Palestinian Authority as part of the Oslo accords, one of Arafat’s first actions was to decree that every institution in the territories under his control – schools, mosques, summer camps, newspapers, radio and TV – would teach violent hatred of Jews and Israel. Every anti-Jewish trope was included, from traditional Muslim “apes and pigs” slanders to memes borrowed from European antisemitism. Terrorists who murder Jewish women and children are treated as military heroes who have carried out successful “operations.” The project was continued by Mahmoud Abbas after Arafat’s death, and in Gaza after the Hamas takeover. Its effect has been to paint Jews as vermin that it is not only permissible, but laudable, to kill.

At some point, Abbas introduced the policy of paying salaries to terrorists in Israeli prisons (if they should be killed during their attacks, the stipend is given to the family). Despite threats from the US and Israel to cut payments to the PA (the US has already reduced aid to the PA in accordance with the Taylor Force Act and PM Netanyahu has promised to start deducting equivalent funds from import duties collected on behalf of the PA), the PA continues to pay terrorists, which Abbas has called his top priority. Salaries are proportional to the length of prison sentences, which means that they are proportional to the severity of the crime.

The combination of the coordinated program of indoctrination, plus financial incentives for terrorist acts, has bred several generations of monsters like Arafat Irfaiya.

What this means is that the leaders of the PLO and Hamas, who have programmed the murderers and who pay them, are also guilty of murder. Indeed Irfaiya and the other monsters are no more than hitmen. The root of the problem is planted higher up.

We have a long road to travel to recover from the errors we’ve made since 1967 and since Oslo. But we have to start small.

As a first step, let’s hang Arafat Irfaiya and go on from there.