Jordan can be Palestine

Posted on December 16, 2018 by Victor Rosenthal

It turns out that I agree with Yair Netanyahu, the 27-year old son of the Prime Minister. Yair was sharply criticized after he posted the following on his Facebook page:

Everyone has their breaking point. Mine was the decision made last week by a Palestinian Arab murderer to shoot at a pregnant woman when there were plenty of uniformed soldiers around. Not that it’s acceptable to shoot soldiers standing at a bus stop, as another Palestinian Arab murderer did the next day, but at least it’s possible to claim that you are at war and they are military targets.

Of course that would mean that the Palestinian Arab murderers are also enemy combatants and should be treated as military targets, not “criminals” who are arrested and sent to probably the most comfortable prison in the world outside of Scandinavia, where they study and watch TV with their friends.

Anyway, Yair and I have reached our breaking points. There are murders and attempted murders almost every day. We try to make agreements, to improve their living conditions, to use the minimum amount of force necessary to protect ourselves. We knock on roofs, shoot rubber bullets, issue work permits, dismantle communities because there is a claim of Palestinian ownership, approve the same building plans over and over without building. They kill Jews.

I read a very interesting article today, by Abe Haak, about the possible scenarios when the Palestinian Authority falls apart – which it certainly will do shortly, when Mahmoud Abbas dies or otherwise lets go of the reins. Haak expects that Areas A and B will dissolve into chaos as the various Palestinian factions fight it out. Fatah will see a struggle between several strongmen, who will also face off against the PFLP, Hamas, ISIS, and who knows what other groups. For some of the same reasons she does not wish to reconquer Gaza, Israel will not try to move in and retake day-to-day control of all of Judea and Samaria.

After the collapse of the PA, conditions will quickly go from bad to worse, leading to a massive flight of refugees to Jordan which Haak expects will reach into the hundreds of thousands. He writes,

As critical supplies dwindle and living conditions worsen, the most desperate armed groups will begin taking risks by attacking those boxing them in. However, the violence that will inevitably erupt will not lead to a clear victory for any faction, as it did for Hamas in Gaza in 2006. Any victories will be local and limited. This is because Areas A and B possess neither the territorial contiguity nor the binary politics of Gaza. Instead, one town will go to Hamas, and the next will remain with Fatah. In one neighborhood, the PFLP will stay dominant; in another, the ISIS loyalists will keep watch.

Haak believes that Jordan will be forced to take control of Areas A and B, with the cooperation of Israel, in order to stanch the flow of refugees. A kind of “Jordanian option” will come into being by default. Haak and certainly many in our government and the IDF would welcome this. What could be better? There would be no Palestinian state, and we could continue our uneasy but relatively stable “peace” with Jordan. Jordan would provide the stable governance that the PA never did.

Unfortunately, regardless of who controls the pockets of heavy Arab population that comprise Areas A and B – and the continued stability of the Jordanian monarchy is by no means a given – this still means that there are massive numbers of hostile Palestinian Arabs quite close to our highly populated areas. And it means that Jews who live in our historic homeland of Judea and Samaria will be no less exposed to terrorism than they are today – possibly more so, because IDF entry into areas A and B would then become international incidents. 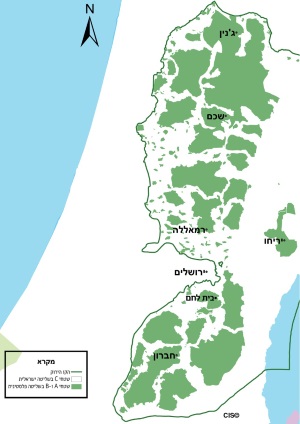 Judea and Samaria, showing areas A and B in green.

The map of Areas A, B, and C is fragmented. Areas A and B (green on the map) are Palestinian cities and towns, and Area C (white) is Jewish communities, roads, military reservations, small Arab settlements and empty lands. There is little contiguity. It would be difficult or impossible to fence off Area C from A and B. It’s hard to see how Jordan could exercise control over A and B in a practical sense, especially since the present border between Israel and Jordan is in the Jordan Valley, a natural barrier that absolutely must be under Israeli control in order to defend the country against attack from the east. Finally, it is almost certain that the violent factions would resist the imposition of control.

There is, however, another “Jordanian option.” And the almost certain flight of refugees predicted by Haak presents an opportunity to actualize it. This, of course, is to encourage – with both positive rewards and negative sanctions – the movement of the majority of the Arab population of Judea and Samaria into Jordan.

Before expressing indignation at the suggestion to engage in “ethnic cleansing,” note that most “two-state” plans involve the involuntary removal of between tens and hundreds of thousands of Jews from their homes in Judea and Samaria. Note also that the refugees will be fleeing an unlivable situation, in which supplies of food and fuel will be uncertain, and firefights between factions will be common.

Jordan will need massive international help in order to resettle the refugees, but considering that this represents a long-sought solution to a great part of the Palestinian problem (Gaza remains), and the end of the millions that are currently being spent annually to maintain the fiction of an independent “Palestine” – a fiction, incidentally, that is nothing more than an excuse to justify a continuous war against the Jewish state – it will be cheap at the price.

There is also the possibility that the Hashemite monarchy will not be able to stay in power after an influx of Palestinian Arabs. It’s not clear why this would be more likely than it was between 1948 and 1967 when those Arabs were under (illegal) Jordanian sovereignty while residing in Judea and Samaria, or more likely than it would be if a “Jordanian option” that did not include the movement of the population, such as Haak proposes, were to be implemented. The Hashemites are a minority and instability is a way of life in the region.

Political analyst Dr. Martin Sherman has discussed at great length the idea of providing cash incentives for Arabs to leave the territories. He calls his plan “The Humanitarian Paradigm,” because he sees the alternative as the very un-humanitarian institution of war. I like his choice of the word “paradigm” because taking it seriously requires a paradigm shift.

What has happened is that those who believe that there should never have been a Jewish state – the Arab world, other Muslim nations, much of Europe, the Soviet Union – managed to create an atmosphere in which the only possible “solutions” to the conflict over Israel’s existence were those by which Israel would cease to exist. So the Arab refugees in 1948 were not absorbed, UNRWA was created to increase the refugee population and maintain their irredentist fervor, massive pressure was put on Israel to reverse the outcome of the 1967 war, and the Oslo Accords and “Peace Process” were embraced by the world.

But the Palestinian Arabs have consistently proven by their actions that Meir Kahane, Yair Netanyahu, Martin Sherman, and I are correct. Coexistence in the same land is impossible, and Israel cannot survive inside what Abba Eban called “Auschwitz borders” – nor should she (but that’s another story).

Today the nature of Palestinian politics, along with the Iranian threat to the Arab world, and the iconoclasm of the Trump Administration, have finally given us an opportunity to bring about the needed paradigm shift. The opportunity may not come again. We should grasp it.

3 Responses to Jordan can be Palestine