Posted on November 27, 2017 by Victor Rosenthal 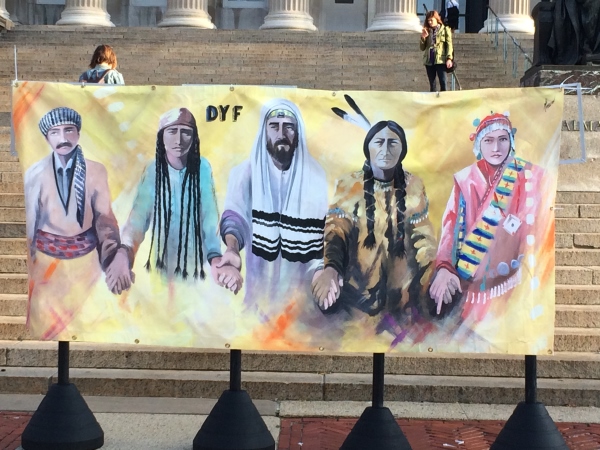 Sick and tired of “Israel Apartheid Week” and other projects to demonize and delegitimize the Jewish state, some Columbia University students have established “Hebrew Liberation Week” during which they emphasize Jewish peoplehood and the Jewish connection to the land.

One of the exhibits (which was placed near the “apartheid wall” built by Students for Justice in Palestine) showed a Jew wearing a tallit standing together with other indigenous people in their traditional outfits. The idea, of course, was to drive home the point that the Jews are indigenous to the Land of Israel, and not “settler-colonialists” as the progressive gospel insists.

But the sight infuriated a new professor at Columbia, Gil Hochberg. Hochberg, who is in some sense Jewish, previously taught Comparative Literature and Gender Studies (of course!) at UCLA, and received her doctorate from UC Berkeley. And she was outraged.

There is, of course, nothing wrong in suggesting an alliance between Jews and Indigenous people, and in the context of Jews living in Europe and elsewhere as “inside outsiders” and as part of internal European colonization (too much has been written about “The Jewish Question” for me to summarize here) it indeed makes sense to compare and point out similarities between the position of Jews as a fragile minority and the position of other oppressed groups, like the indigenous, colonized, enslaved, and more. However, placing such images underneath the Israeli flag makes them, at best, tasteless depictions of a pseudo alliance. Suggesting, as the posters do, that Jews have been driven out of their land (like indigenous people) and have finally returned to Israel–a trajectory that all indigenous people should unite behind–is a crude and cynical manipulation of (Jewish) history and a vulgar fabrication that not only makes no sense, but is also offensive in its use and abuse of indigenous peoples’ histories of oppression. (my emphasis)

What is crude, cynical or fabricated here? Jews are indigenous to the Land of Israel, were driven out “like indigenous people,” and did – unlike so many indigenous groups – succeed in reestablishing a sovereign state in their historical home.

The real fabrication is the tendentious Palestinian narrative. Do I need to remind readers yet again that the ones trying to steal the Jewish historical narrative – the real “cultural appropriators” – are the so-called “Palestinians,” most of whom are descended from late-19th or 20th century migrants? And that even the few that could trace their patrimony back to the 7th century Muslim conquest are, after all, descended from foreign colonialist invaders? And that the Palestinian story of Jewish ethnic cleansing is mostly false? And that the Palestinian Arabs and their allies fully intended to finish Hitler’s genocide of the Jewish people and were only prevented by hard-fought Jewish victories in 1948 and 1967? And that the “Palestinians” have no unique language, religion, or common place of origin, and have only even considered themselves a people since the 1960s? The essence of their peoplehood, that which separates them from other Arabs and makes them uniquely Palestinian, is just their commitment to eternal hatred for and confrontation with Israel!

Hochberg would probably say, following Edward Said, that the Jews don’t “belong” in the Middle East. Yes, it’s true that the Jewish people – some of them – underwent a process of Westernization which made them think somewhat like Europeans (although Jews who lived in the Middle East today comprise about half of Israel’s population). Regardless, the Jewish people did not lose their right to their historical homeland because of this.

Consider the Maori people of New Zealand: do they have aboriginal rights to their homeland that the Jewish people do not have to theirs? Why aren’t Jews like native Americans? Does success in defending oneself against genocide and achieving sovereignty void a people’s rights?

As a bold background to the blue and white kaffiyehs being sold on location, there were posters covering the plaza, inundated with images of Brown and Black people and proud Israeli soldiers: Asians (children of mainly Filipin@ guest workers who became Israeli citizens and “won” the opportunity to serve in the Israeli army), Ethiopian Jews, Bedouins, and overtly joyful Druze. If yesterday’s message was that the Israeli army is welcoming of gays*, today’s message is that the IDF is a place where Brown, Black, African, and Arab people all feel happy. Together.

In addition to the soldiers, there are images of Arab-Jews (Mizrahim) who must not be forgotten, not again. Images of Yemeni families, perhaps making their way to the Promised Land, are shown on other banners.

Here we see the vacuous circular reasoning so beloved by those who have been forced to replace the racial Jew-hatred of the Nazis with the more abstract but equally irrational and obsessive hatred of the Jewish state. Why can’t Israeli tolerance for LGBT people be an argument for Israel being a progressive, tolerant state? Because, they insist, it isn’t a progressive, tolerant state. Why can’t there be dark-skinned, non-Ashkenazi Jews as well as Druze, Bedouins and others who identify with the state of Israel strongly enough to serve in the IDF? Because, they insist, Israel is a racist, apartheid Ashkenazi-ruled state.

The truth, that Israel is populated by all kinds of people who are not alienated from their society and not suffering from endemic racism; that many Ashkenazim, Mizrahim (emphatically not “Arab-Jews”), Ethiopians, Druze and others, like each other and are friends; that many Israeli soldiers, Druze included, actually are overtly joyful from time to time, is simply too much for the social-justice-warrior conceptual scheme espoused by Hochberg and her ilk.

So they simply preserve their ideology by denying the evidence of their eyes.

This entry was posted in Academia, Post-Zionism. Bookmark the permalink.