Posted on September 3, 2017 by Victor Rosenthal 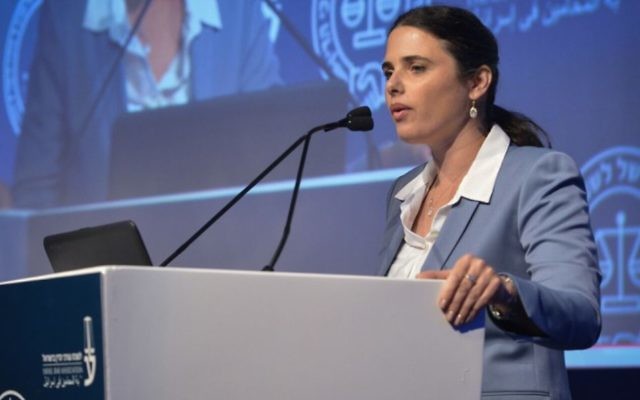 Last Tuesday, Justice Minister Ayelet Shaked spoke at an Israeli Bar Association conference. What she said constituted an ideological manifesto of great importance, much more so than the particular issue she spoke about, the Supreme Court decision on the rights of the state versus those of illegal immigrants:

“Israel of 2017 is a country that’s constitutionally made up of crisscrossing individual rights, without its Basic Laws referencing Israel being the nation state of the Jewish people,” Shaked lamented.

“Zionism has become a blind spot for the judiciary,” she continued. “Questions concerning it have become irrelevant. National challenges are a judicial blind spot, not at all to be considered in today’s climate, and certainly not to be ruled in favor of when faced with individual rights issues.

“The question of demographics and preserving the Jewish majority are classic examples,” she explained. “Israeli [jurisprudence] doesn’t even deem them values worthy of consideration.” …

“The court’s response [to illegal immigrants] was striking down—and then striking down again—the law attempting to deal with this phenomenon,” she continued. …

At the same time Shaked sought to make clear that she doesn’t make light of those individual rights, saying she considers the system maintaining them to be “almost sacred.”

“But not devoid of context,” she clarified. “Not detached from Israeli uniqueness, our national tasks and our very identity, history and Zionist challenges. Zionism should not—and will not—bow before a system of individual rights interpreted universally in a manner detaching it from the chronicles of the Knesset and the history of legislation we’re all familiar with.”

During the 1990s, under the leadership of its president Aharon Barak, Israel’s Supreme Court took the position in various decisions (like this one) that individual rights – equality, democracy – always override the collective rights of the state as the state of the Jewish people. Barak stipulated that Jewish values are identical to the liberal humanistic ones that underlie the secular Western morality that characterizes the most progressive elements in Europe and the US. The only sense in which Israel can be a “Jewish state” from this point of view is that it has a Jewish majority and a Law of Return for Jews.

The problem with Barak’s position is that if individual rights are interpreted in the broadest sense (i.e., no distinction is made between civil and national rights) and if these rights always override the rights of the state, then the state may not be able to preserve its Jewishness. Even its continued existence could be in question.

Zionism came into being because Herzl and others understood that a necessary condition for the survival of the Jewish people was the ownership of a specifically Jewish nation-state. If the state is to be based on democratic principles, then a Jewish majority is a necessity for it to retain its Jewish nature. Protecting this majority, maintaining Jewish symbols like the flag and national anthem, and encouraging Jewish immigration are all legitimate responsibilities of the state.

The majority of citizens and Knesset members disagree with Barak. They believe that the state has a right to protect its Jewish character even if this means that non-Jews will be treated differently from Jews in some respects. I call this the “Zionist imperative.” But the legal, media, educational, cultural and artistic elite, along with left-wing and Arab members of the Knesset, are no longer (if they ever were) Zionists. This is the source of much of the political tension in Israel today.

MK Tzipi Livni clearly illustrated this divide, when she responded to Shaked saying “protecting [human rights] is also the essence of Judaism and part of Israel’s values as a Jewish and democratic state.” For Livni, as for Aharon Barak, there is no distinction (and there can be no conflict) between individual rights and the Jewishness of the state, because there is no distinction between Jewish ethics and progressive, universalistic political philosophy. Livni would be at home in an American Reform Temple. While she would call herself a Zionist, her ideology is actually inconsistent with Zionism.

Thus there is a conflict between Zionism and the universalism (see it in its fullest expression here) popular among American progressives and Israeli leftists, who are more concerned with the rights of Palestinians and illegal immigrants than Jewish residents of South Tel Aviv. Shaked clearly understands the need to balance the exercise of individual rights with the right to self-preservation of the Jewish state. Not every individual desire – particularly of non-Jewish minorities – can be treated as a “right” in the context of a small Jewish state, especially when some of the minorities take anti-Zionist and even anti-Jewish positions.

Shaked has championed the Nation-State Law which would for the first time introduce an explication of “Jewish state” into Israel’s basic laws and wants to limit the power of the left-leaning Supreme Court. She wants to deport illegal immigrants and opposes the fantastical “two-state solution.”

She has always been hated by the Left, whose members made crude sexist comments when she was appointed Justice Minister (they stopped when even some leftist female MKs defended her, and when she demonstrated her ability to do her homework and understand complex issues despite her degree in computer science rather than law). But her remarks at the Bar Association opened the floodgates of ugliness, where some lawyers shouted “apartheid.” An op-ed in Ha’aretz even called her a Nazi in so many words.

Such criticism illustrates both the stupidity and desperation of her post-Zionist opponents, who  seem unable to distinguish between civil and national rights, and who apparently do not believe that there are such things as the Jewish people’s collective right to self-determination or the state’s right of self-defense.

Ayelet Shaked is eminently qualified to be Prime Minister, in part because as a woman she has had to perform far better than her male counterparts in order to be taken seriously. But there is no clear path for her. Formerly a member of the Likud, she moved to the Jewish Home party, where she is no. 2 on the party list to leader Naftali Bennett. Jewish Home is the successor to the National Religious party, the traditional religious-but-not-Haredi opposition, and has never received enough votes to form the government.

Shaked, who is secular, was asked to join the party in order to broaden its appeal to attract non-religious right-wing voters. Nevertheless, it’s hard to imagine it being the largest or even second-largest vote getter (there are aspects of the party that are out of step with Israel’s secular majority, like the extremely socially conservative positions of some of its leaders). Even if it were, Bennett is the party leader, and Shaked has said that she would not oppose him.

Still, the combination of ideological clarity and seriousness that characterizes her is hard to resist. The era of Netanyahu, for better or worse, is coming to an end. Israel has numerous female Knesset members and has already had one woman Prime Minister.

It would be a big surprise if Shaked were to become Prime Minister.

But Israeli politics are full of surprises.

1 Response to Surprise us, Ayelet Shaked