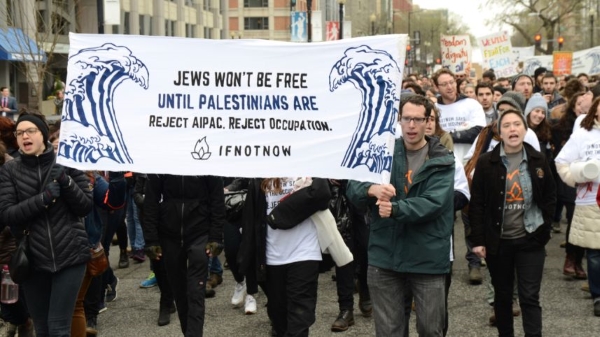 Yesterday, Jewish activists belonging to the “If Not Now” (INN) group, a more-militant offshoot of J Street, held a demonstration in Washington outside the annual AIPAC policy conference, and even blocked the doors of the convention center for a time. They accused AIPAC of promoting “endless occupation and Islamophobia” and of maintaining a “cozy relationship with the Trump administration.”

Their complaints are wrong. AIPAC does not advocate any particular policy for Israel to follow toward the Palestinians: it supports the policy of the government of Israel. Today that calls for direct negotiations with the PA to create a Palestinian state with limited sovereignty (demilitarization, limitations on airspace and control of borders, etc.), not an especially “right-wing” policy. AIPAC isn’t ideological; to oppose it is simply to oppose Israel.

AIPAC also works to develop bipartisan support for Israel and its policies. It would be hard to do this if it adopted an antagonistic relationship with the current administration, and indeed it bent over backwards to try to stay on the good side of Obama’s anti-Israel one (including the embarrassment of acceding to his request to lobby Congress for military action against Syria in 2013, from which Obama pulled back at the last moment).

INN found AIPAC a very visible and convenient target to express their anti-Israel views, get national exposure for their organization, and energize their activists. And so they chained themselves to doors, called on Israel to “free Palestine” and otherwise demonstrated their strong negative feelings toward Israel and US support for it.

But it isn’t the facts that motivate them. Which is not surprising, because they don’t know them.

What is clear about almost all American Jews (except for the less-than 10% of them that are Orthodox), especially younger ones, is that their attitudes are not fact-based, they are ideologically driven. They do not know or choose to ignore the strategic and geographical facts that determine Israel’s security situation. They do not understand the motivations behind the Palestinian movement, and the intentions and goals of Palestinian leaders, nor the daily life of Palestinian Arabs. Whatever sketchy understanding they may have of the historical events leading up to and surrounding the establishment of the Jewish state is distorted.

If they did have that knowledge and understanding, then that would imply that the INN people are consciously calling for another genocide of the Jewish people. But I give them – at least the rank and file, if not the leadership – the benefit of the doubt and treat them like fools and not villains.

The leader of “If Not Now” is Simone Zimmerman (27), who was Bernie Sanders’ national Jewish Outreach Coordinator until someone found a year-old Facebook post in which she viciously and obscenely attacked PM Netanyahu. It’s interesting that she at least claims to have been a pro-Israel activist when she entered Berkeley, but quickly switched sides when her arguments “were not convincing to the other side.” She also noted the preponderance of “people of color” with the Palestinians, which seems to be important to her. She joined J Street, and later became National President of J Street U, J Street’s student group, which is more extreme than the parent organization. In a 2014 video, she comes across as a sincere but ill-informed person who internalized the Palestinian story when it was presented to her forcefully and in personal terms. Clearly the Jewish/Israeli point of view, despite her years of Jewish education, was not.

INN falls ideologically between J Street, which opposes the BDS movement, and Jewish Voice for Peace (JVP), which endorses it. INN takes no position. Like these other “Jewish” anti-Zionist organizations, it seems flush with money, with a sophisticated website, training programs and mass meetings; however in its filing as a  501(c)(3) organization it claims an income of less than $50,000 annually, and is not required to file a full IRS Form 990. J Street, by contrast, got $3.15 million in 2015 and its separate education fund received more than $9.7 million. JVP had more than $2.5 million in contributions and grants in 2015. None of these organizations is required to divulge their donor list (although J Street has an associated PAC which, because it supports political candidates, does list contributors, some of whom are associated with Arab and Iranian organizations).

I’m expecting that this organization will go somewhere. Perfectly in tune with the campus mood (for example, representing “Ashkenazi, Sephardic, and Mizrahi, secular and religious, queer and Jews of color”), with enthusiastic but not too scary followers, it has a young, attractive woman leader who speaks the language of her student constituency. Jewish students who feel the pull to belong to the social justice movement, but who have difficulty achieving the self-abasement necessary to join with black and Hispanic students in anti-racist activities, and who still have a strong enough Jewish identity to reject Students for Justice in Palestine, will find INN a perfect fit.

How did we lose Simone Zimmerman? And how are we losing her followers?

We have allowed the other side to put on the mantle of oppression. Supporting the Palestinians becomes a matter of social justice. Today’s university students are immersed in a conceptual scheme of oppressor and oppressed, colonizer and colonized. To get them on our side, we have to turn this around. And that requires both factual knowledge and emotional impetus.

Accurate and honest historical analysis of the Jewish and Arab peoples in the region, the creation of the Jewish state and its relations with the Palestinian Arabs would deprive the Arabs of their status of victims (except insofar as they have been victimized by Arab political leaders). It would also show that the oppressor/oppressed dichotomy is wrong; both sides act and are acted upon. And it would replace the image of a powerful Israel and a weak “Palestinian people” with one of a small, vulnerable Israel – despite its power – surrounded by a sea of implacable Arab and other Muslim enemies.

We do not provide this background. And if they don’t get it before they go to the university, there is no hope that they will learn it there.

But even more importantly, we have neglected the emotional element that is essential to persuasion. In her video Zimmerman tells about how Palestinians presented her with one powerful personal testimony after another – how they felt when “the bombs fell” in Gaza, how the speaker was “beaten at a checkpoint” or subjected to “racist” profiling at the airport. These testimonies had emotional impact that she didn’t get in her Jewish day school classes. She tells about numerous trips to Israel, but did she meet with the families of the victims of Arab terrorists? Did she try sprinting for shelter when the alarms blare in Sderot? Did her Israeli relatives describe digging graves in Tel Aviv before the 1967 war? That would be a start. Facts are necessary to win arguments, but emotional experiences are what move people to action. One of the reasons for the degree of success found in programs like Birthright is that they make such emotional encounters possible.

The last time American Jewish young people took action on behalf of a Jewish cause was to help Soviet Jews emigrate. They were encouraged to do so by personal stories, like that of Natan Sharansky, as told very effectively by his wife Avital. We have to find ways to bring emotionally powerful experiences to them again, this time from Israeli Jews.

The other side is ahead of us both in the intellectual and emotional realms. We rely on historical arguments from the 1960s that they have learned to refute. It’s as if the pathologically apologetic “new historians” of the 1980s (and the Zionist response to them) didn’t exist for us. But even worse, we let them take control of the emotional narrative.

No wonder that Jewish university students end up supporting, in the name of justice, the ones who would happily murder them.

2 Responses to Why is Israel losing American Jewish youth?