Posted on February 26, 2017 by Victor Rosenthal 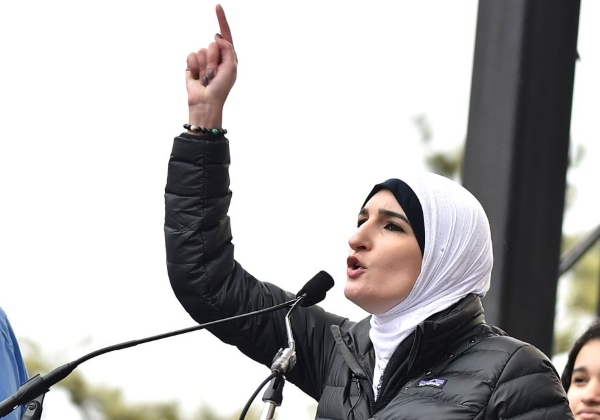 Sometimes you need to admire a good move, even when it’s your opponent that makes it.

I’m referring to Linda Sarsour’s wildly successful crowd-funding appeal to repair the Chesed Shel Emeth Cemetery in St. Louis, Missouri damaged by vandals on February 20th. Although originally targeted at $20,000, it has so far collected $128,690 (as of 26 February). Sarsour and company may donate some excess funds to another Jewish cemetery in need of repair. The campaign was run on a Muslim-oriented site which hosts other projects to repair mosques, support Islamic education, help Syrian refugees, and so forth.

Sarsour, of Palestinian Arab descent, supports BDS, a movement whose goal is to replace Israel with an Arab state. On her Twitter feed and Facebook page, she has expressed the harshest criticism of Israel and Zionism, accuses Israel of massacring Palestinians and calls for an end to the “occupation” which she dates to 1948. She favors a “one-state solution” and a right of return for all the descendents of Arab refugees, which means one state with an Arab majority. There is a lot more that can be said of Sarsour and her anti-Israel positions and connections.

Some are wondering whether the Jewish cemetery should accept her contribution.

The situation reminds me of other similar, but not precisely analogous, cases. In 1952, Israel and West Germany signed a historic Reparations Agreement, in which the Germans agreed to compensate Israel for resettlement of Jews displaced by the war, and to compensate individual Jews who suffered in the Holocaust. The agreement triggered the most acrimonious debate in Israel’s history.

Israel had taken in hundreds of thousands of refugees from Europe and Arab nations, and more were arriving every day. The economic situation was dire, and the country struggled to feed, house and integrate them. Prime Minister Ben-Gurion favored the agreement for practical reasons and because he felt that justice demanded compensation for stolen Jewish property. Both the Right and the Left viciously attacked him, on the grounds that the agreement in effect absolved Germany of guilt.  Ben-Gurion had the power, so he prevailed. Many have not forgiven him even today.

Of course, Israel needed the German money, and St. Louis doesn’t need Sarsour’s. And Germany was responsible for the Holocaust, while Sarsour didn’t knock down the headstones in the St. Louis cemetery. Still, doesn’t taking Sarsour’s money – which isn’t even her own money – in some sense validate her anti-Israel position?

Here’s another, closer analogy. Almost exactly one month after 9/11, Saudi Prince Alwaleed Bin Talal offered $10 million to New York City’s Twin Towers Fund. Mayor Rudy Giuliani refused to take the money, after Bin Talal suggested that American pro-Israel policies were in part responsible for the attack. Giuliani rejected the idea that there could be any excuse for such an outrageous attack, as well as the implication of moral equivalence between countries like the US and Israel, and terrorists.

So should the Jews of St. Louis take the money?

Some see no problem, and indeed think Sarsour’s gesture marks the beginning of better relations between Jews and Muslims in America. Many liberal Jews strongly oppose President Trump’s ban on immigration from certain Muslim countries, as do Muslims. Why shouldn’t American Jews and Muslims look past the conflicts in the Middle East and try to establish good relations based on their shared concerns about bigotry in the form of Jew-hatred and anti-Muslim attitudes? Rabbi Brigitte S. Rosenberg of St. Louis’ United Hebrew Congregation (Reform), said “It’s sad that it’s happening in the midst of tragedy, but it’s a beautiful gesture … Whatever your views of Israel, we can set those aside and recognize that we’re human.”

But ought American Jews to set the matter of Israel aside?

There is no such thing as a gift that doesn’t come with a corresponding obligation. And a person or institution that represents a larger group needs to feel the obligation more keenly than an individual. Just as the Prime Minister of Israel needs to be careful about accepting cigars from friends who are businessmen that might have dealings with the government, a Jewish organization needs to worry that accepting contributions might imply acceptance of a political program.

This is why Giuliani was right in not taking Bin Talal’s money on behalf of the City of New York.

Sarsour’s views are so extreme that they would be rejected by the vast majority of American Jews, including, I’m sure, Rabbi Rosenberg and her congregation. She is not just “a Muslim,” she is a Muslim that wants to see the Jewish state destroyed and has been very public about it. It’s impossible to see her as simply someone who wants to improve Jewish-Muslim relations.

Jews, especially liberal ones, have often stood up for other faiths, including Muslims, when they have been the victims of bigotry. They can continue to do this. But they don’t have to take gifts from someone like Sarsour.

Unlike Ben-Gurion’s Israel, the cemetery doesn’t need the money. The day after the incident, the local Jewish Federation opened a “Jewish Cemetery Restoration and Security Fund” which had over $100,000 in it within two days. The fund is intended both for fixing the cemetery and meeting “the growing security needs of the Jewish community.” The cemetery itself also accepted donations. Almost all of the damage has already been repaired.

As an Israeli, I tend to be cynical. And I see Sarsour’s gesture as cynical as well. The cemetery – and by extension, the American Jewish community – can take the money, and thereby legitimize Sarsour and place themselves in her debt. Or they can reject it, and allow themselves to appear not only ungrateful, but bigoted themselves.

This was a masterful bit of guerrilla PR by Sarsour. At absolutely zero cost to herself, she has already placed her name in the headlines and gained a reputation as a champion of tolerance, although her position about Israel is anything but tolerant! At the same time, she’s put the liberal Jewish community in an unpleasant bind.

We won’t win this one, but we can do damage control. The best public response by the Cemetery Society would be something like this:

Your public support for the BDS movement is a direct attack on our state. BDS is primarily a strategy to delegitimize the Jewish state of Israel in order to make it easier to destroy. Just as you would not accept a gift from someone who advocated “transfer” of all the Palestinian Arabs out of what they consider their homeland, we must respectfully decline your gift.

Sincerely,
The Jews of St. Louis

2 Responses to The Sarsour gambit