Sovereignty is the only solution

Posted on February 3, 2017 by Victor Rosenthal 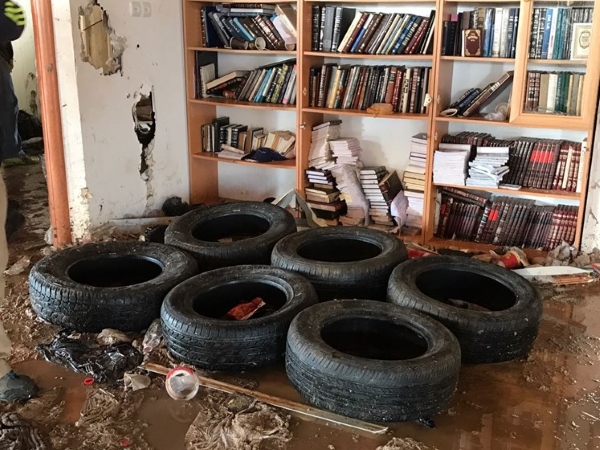 The synagogue at Amona, after police broke in and removed activists that had barricaded themselves inside. Courtesy Arutz 7.

Hope will grow out of this difficult day and we will build a new community after the demolition of Amona’s homes. Out of the wreckage of Amona we will build children’s playgrounds throughout Judea and Samaria. As a result of the legal defeat, we will impose new rules in Judea and Samaria and legalize all the communities. – Naftali Bennett

Don’t kid yourself. It was a defeat. The Arabs and their Jew-hating European friends beat us, badly. They set us against each other, activated their anti-Zionist allies among us, played on our divisiveness and our weakness, and orchestrated, yet again, scenes of Jews dragging other Jews out of their homes in the land of Israel and then destroying those homes. The police were responsible for removing the “settlers” – horrible word – and the army will be responsible for destroying the structures, bulldozing the land so it will be difficult to tell that Jews lived there. One wonders who will be responsible for sowing the land with salt.

The Knesset may well pass the “regularization law” that will allow other communities with claims against them to pay a ransom that will keep them from being erased as well, but do you think the Supreme Court – the same Supreme Court that decided that the whole community had to be razed because about one-half acre out of 125 “belonged” to Arabs, who were given it as stolen property by King Hussein, the same court that at the last minute scuttled the compromise that would have allowed at least some Amona residents to move to a nearby location, because Arabs had claims on that land too – will allow the law to stand?

I have heard many versions of who is at fault here. The leftist Supreme Court, which has endless compassion for Arabs but not for Jews? The Netanyahu government which “didn’t stand up for” the people of Amona? The European-financed NGOs with multi-million shekel budgets, working day and night to impeach, weaken and delegitimize our country? The Knesset which didn’t pass a law with teeth to stop the flow of money to these treasonous organizations?

There is plenty of fault to go around, but it comes down to a lack of Zionist will. It is the result of not exercising the sovereignty over Judea and Samaria that was given to us both by God and international law (real international law, not the phony arguments of the Europeans who want to grant Hitler the victory over the Jews that he failed to win in the 1940s).

It’s our land, it belongs to us, the Jewish people, the original indigenous inhabitants of the land of Israel, and not to the descendents of Arab migrants of the 19th and 20th centuries, who don’t even have their own language, religion or culture (except for the culture of murder and hate that has grown up since they failed to kill or expel us in 1948).

If we don’t recognize this truth, if we keep on internalizing the Arab narrative of upside-down history in which we are colonialists that are occupying their land, in which there was no Jewish Temple in Jerusalem and in which the solution is for us to “go back to Europe,” as the mayor of an Arab village near Amona suggested, then there is no hope for the continued existence of a Jewish state.

It’s not possible to compromise with an ideology that says that we have no place here, and which more and more resorts to murder to prove it. And why should we? If a gangster knocks on the door of your house and says that it belongs to him, do you offer to give him the living room as a compromise?

Mr. Bennett may have something up his sleeve that I don’t know about, but it will take more than the passage of a law that won’t survive the next meeting of the Supreme Court to turn this around. The real solution is to do what we should have done in 1967, and take full possession of all the land that belongs to us.

This entry was posted in Israeli Politics, Israeli Society, Zionism. Bookmark the permalink.

2 Responses to Sovereignty is the only solution