Miri Regev does not “Love the Juice”

TRIGGER WARNING: This post includes a photo of a remarkably vulgar performance.

But now I am ashamed. I look at my government and my capital and feel deep disgrace. Who are these hoodlums who have taken over the government offices in Jerusalem and begun smashing and shattering everything precious and sublime that was created here? Who are these ignorant hooligans who curse leftists all day long and search for traitors and are constantly busy silencing every criticism? Who are these boorish people advancing the so-called suspension bill, and in doing so are contaminating Israeli democracy? Who are these uncultured ones who censor books and intimidate theaters and undermine higher education, to which we owe our existence here?

Shavit has gone entirely off the rails, and he is one of the more reasonable ones.

The hoodlums he refers to are Benjamin Netanyahu, Ayelet Shaked (Justice Minister), Naftali Bennett (Education Minister) and Miri Regev (Minister of Culture and Sport). And here are their horrible crimes:

Cursing and searching for traitors. Shaked’s Transparency Law, which will require non-governmental organizations that get more than half of their funds from foreign governments to indicate that fact on all of their material. Shavit doesn’t get that their criticism is not being ‘silenced’; it is only being footnoted for its source.

The suspension bill (supported by Netanyahu), if it passes, will make it possible for a member of the Knesset to be suspended for a period up to the remainder of his or her term upon the vote of 90 out of 120 MKs (an almost impossible majority) for “negating the existence of the State of Israel as a Jewish and democratic state; inciting to racism; and supporting armed struggle by a hostile state or a terrorist organization against the State of Israel.” These are word-for-word the same criteria that appear in the Basic Law that sets out the qualifications for a party or individual candidate to be included in the Knesset, which was used to exclude Meir Kahane’s Kach party in the 1980s.

Opponents are furious. It seems that they want to retain the option of running as moderates and then, upon election, calling for the destruction of the state. Why else would they oppose it?

Censoring books. Shavit is referring to a controversy in which some teachers and educators wanted to include a novel about a love affair between a Jew and an Arab on a required reading list for advanced literature students, and Naftali Bennett’s Education Ministry decided not to include it. The Ha’aretz headline said that the book was “banned from schools,” but nothing like that happened. The officials responsible for making the list of required books simply did not include it. Nobody is stopping anyone from reading it.

Intimidating theaters. Minister of Culture and Sport Miri Regev, the woman the Left loves to hate almost as much as they hate PM Netanyahu, froze government funding for an Arab theater that produced a play which portrayed in a sympathetic light an Arab terrorist who abducted and murdered and Israeli soldier. Again, nothing is censored or banned – the theater will have to find an alternative source of funds.

Undermining higher education. Naftali Bennett replaced the Vice-Chairperson of the Council for Higher Education. The subtext is that the council oversees the distribution of government funds to colleges and universities, and the existing council, dominated by University representatives, wasn’t doing its job. Bennett was hardly undermining anything, just exercising his prerogative to ensure oversight of the use of taxpayer funds.

Anyway, yesterday Miri Regev walked into the lion’s den and spoke in front of a conference on arts and culture sponsored by the extreme left-wing Ha’aretz newspaper. She began with an alleged quote from Sun Tzu, “cut the bullshit” (in English). The rest of her talk was met with boos and was interrupted twice by hecklers.

Throughout history, art has rarely been able to pay for itself. Visual arts, theater, music, all had to have patrons. Sometimes there were rich nobles who served this function, and of course the Church commissioned some of the West’s greatest art. Today, governments have become the channels to support artists.

In the past the patrons had a great deal of influence over the product of artists. When a government becomes the immediate patron, then it has the responsibility to ensure that the wishes of the real patrons – the citizens – are respected. That doesn’t mean that they should dictate to artists, as the Soviet regime did. But it’s only reasonable that the citizens shouldn’t pay for art that promotes the destruction of their society.

The arts in Israel receive a great deal of money from the government, and until now it has been given without any control over what is produced. Regev wants to change that – not to interfere with anyone’s expression, but to ensure that taxpayers do not support ‘art’ that involves inserting our country’s flag into the rectum of the ‘artist’, as was done by Ariel Bronz at this very conference when he performed his piece “Love the Juice” (photo editors at Israel HaYom not only pixilated Bronz’ doubtless hairy butt, but blanked out the flag): 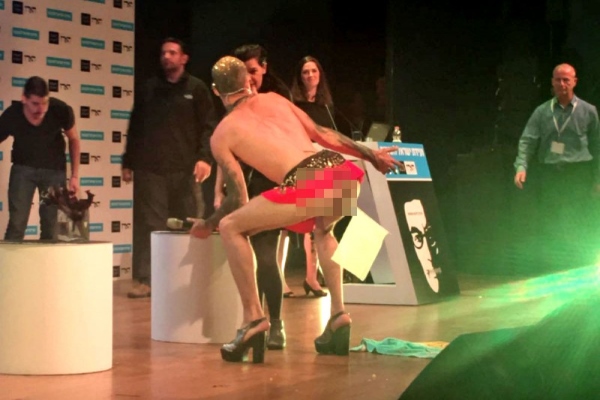 This performance is a practical demonstration of the rightness of Regev’s point of view, and if she didn’t pay him to do it, she should have.

Why indeed should the ordinary Israeli, who works very hard to pay his taxes and may have had friends and family members who sacrificed their lives for the country whose flag is dishonored here, put food in this parasite’s mouth? Or, for that matter, that of ‘artist’ Natali Cohen Vaxberg who recorded herself defecating on the flag?

Who are the hoodlums, boors, hooligans and thugs here: Netanyahu, Regev, Bennett and Shaked, or the traitors in the Knesset, the anti-state extremists in the NGOs, and the ‘cultural’ establishment exemplified by Bronz and Vaxberg?

This entry was posted in Israeli Politics, Israeli Society. Bookmark the permalink.