How to end the intifada — for good

Posted on November 6, 2015 by Victor Rosenthal 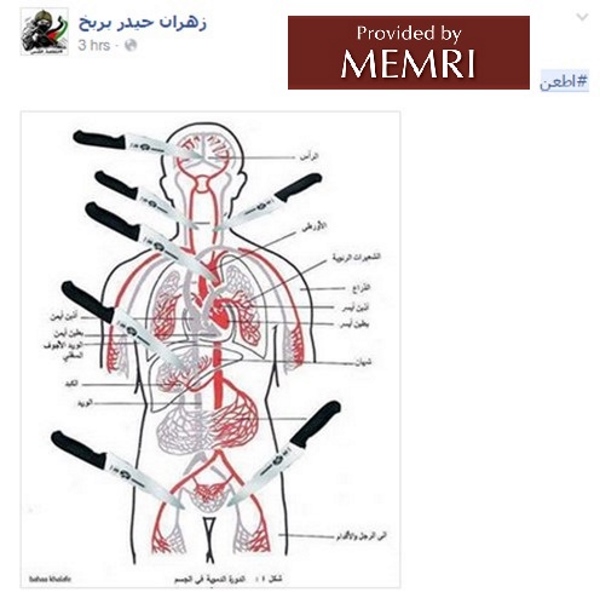 Chart posted on Facebook showing where to best stab a Jew

Although the perpetrators of the recent terrorist incidents are mostly young people not associated with terror organizations whose actions are not explicitly ordered by the Palestinian Arab leadership, they are nevertheless part of a planned campaign that is orchestrated by that leadership. The strings are pulled effectively by way of social media, with no direct link between the ‘commanders’ and the ‘soldiers’. This is one of the reasons that it is so difficult to interdict the terrorists before they strike.

The current wave of violence and terrorism is part of the overall “popular resistance” strategy adopted by the Palestinian Authority (PA) and Fatah at the Sixth Fatah Conference in August 2009. It is manifested by rising and falling levels of popular terrorism. The current wave (which is unique in some aspects) is one of the most serious. Its popular terrorism includes riots, throwing stones and Molotov cocktails, and stabbing and vehicular attacks which are supported and condoned by the PA. The current wave of Palestinian terrorism, like those before it, has included several shooting attacks, which are not included in the modus operandi of the “popular resistance,” but the PA does not condemn them, and in effect supports them.

The long-term objective of the Arab leadership is to foment violence and chaos in Israel so as to interfere with her ability to defend herself against external threats and also to provide an excuse for intervention by the ‘international community’ to force Israel to make territorial and other concessions to the PLO and to Hamas. A weakened and attenuated Israel, they believe, will ultimately suffer a defeat in a regional conflict severe enough to cause enough of the population to flee so that the state will disintegrate and they can take over.

Although Hamas and the PLO will fight each other for control, they have consistently cooperated in the endeavor to disrupt the Jewish state. This is nothing more than an updated version of the PLO’s ‘phased plan’ of 1974.

This intifada is different from the last one because control over the violence is almost entirely decentralized:

In most instances [the terrorist] carries out the attack by himself following a spontaneous personal decision without instructions from any organization or leadership. He does not follow an Islamist ideology (some of the terrorists lived fairly secular lives) and does not belong to a terrorist organization, although he feeds off the incitement to terrorism and anti-Israel hatred disseminated by the various terrorist organizations. …

The Palestinian terrorist who carries out an attack in Israel is motivated by Palestinian nationalism, and for the past six years he has been deeply influenced by reports of popular terrorism. He has also been influenced by events on the Temple Mount and by the false slogan “Al-Aqsa mosque is in danger.” He is personally and socially frustrated and feeds off the anti-Israel hatred and incitement on the social networks (mainly Facebook).

Indeed, Micah Lakin Avni, whose father Richard Lakin was murdered in Jerusalem last month, has called it “The Facebook Intifada,” and called for action by social media providers to stop the use of their networks for incitement. They are used for promulgation of lies about Israeli actions (“al-Aqsa is in danger,” “executing Palestinians and planting knives on them”), encouraging terrorism, giving practical advice on ways to kill, and honoring those who have perpetrated terrorist acts – especially ‘martyrs’.

Social media are used directly by the PLO/PA, Hamas, Islamic Jihad and others, but also by individuals. Some of the pages quite explicitly incite murder.

In addition, the presentation of videos and descriptions of terror attacks after they occur, especially including accusations of deliberate murder of Palestinians and other humiliations, builds on previous incidents to infuriate susceptible young people and encourage them to go out and commit attacks of their own.

Of course there are other means of communication but social media have been a game-changer, making it possible for our enemies to order up a more pervasive violent upheaval than ever in the past, to recruit people ready to die for the cause, to make it almost impossible for Israeli security forces to stop them, and to provide a continuous stimulus to perpetuate the violence for an unlimited time.

It seems then that there are two points at which we can attack this: the leadership that provides the top-down impetus and justification for it, and the social media that create the positive feedback loop that keeps the intifada alive.

Israeli officials, particularly in the army, have argued that the PA/PLO and Hamas are better alive than dead: they would be replaced by something worse; Israel would then have to take over the governance of the Arabs; the army would have to deal with insurgencies like those in Iraq and Syria; and nobody wants to do reserve duty in the territories. I think current events show that it is becoming harder to justify this position.

After Oslo, the PLO systematically eliminated any Arab leaders who would admit that they favored coexistence with the Jewish state. And since Oslo, the PA/PLO has been ‘educating’ its children for martyrdom (and needless to say, Hamas is doing the same thing). We are paying the price today, as members of the empathy-free Oslo generation have come of age with the ability to plunge a knife into the back of an 80-year old Jewish grandmother or stab a 2-year old toddler, feel good about their ‘accomplishments’, and be considered heroes in their society.

At the same time, the diplomatic and legal war against the state of Israel waged by the PLO/PA, which quite successfully plays off the latent (and not-so-latent) Jew hatred in Europe and the American Left, is beginning to bear fruit. The EU is about to take the first steps toward boycotting Israeli products, and the Obama Administration is simultaneously getting ready for a new round of badgering Israel, while threatening to not veto a French resolution in the UN Security Council declaring all settlements illegal and calling for the creation of ‘Palestine’ beyond the 1949 lines.

Further, in the event of a conventional military conflict with Hezbollah or Iran, the possibility of the PA “security forces” opening an additional front is a real possibility.

These considerations suggest that the PA has outlived its usefulness, and the vicious PLO – which cynically violated its promise to be a peace partner from day one of Oslo – should be eliminated for once and for all.

It is also absurd for Israel to accept Hamas control of Gaza, whereby its leaders devote all available resources to preparing for the next war, which needs to be fought and re-fought every several years. So far we’ve been lucky that they haven’t succeeded in tunneling into a nearby kibbutz, and that none of their rockets has struck a skyscraper in Tel Aviv, but it’s stupid to let them keep trying.

It is not unthinkable that within a few years Israel could find herself fighting Hamas, Hezbollah, the PA, Iran and the Islamic State at the same time!

This is not to say that the tanks should roll tonight. A great deal of creative thinking and planning has to take place first. The experience of Iraq and Libya shows what happens when a regime, no matter how evil or dysfunctional, is destroyed without sufficient consideration for what will replace it.

The other pressure point to stop the bleeding is the social networks. Facebook is now the target of a class-action suit to force it to remove hateful and inciting pages, which they have been resistant to do. This may or may not be effective, but in any case will take time.

There are technical solutions to stop incitement, although it would not be cost-free for the networks. But if they don’t cooperate, there are also ways to block them – Iran and China have done so to some degree – and I’m sure that the corporations that are raking in cash from their operations among affluent Israelis (both Jews and Arabs) would listen to a credible threat from the Israeli government that they might be blocked.

The effects of decades of education for hate will not be erased in a short time, even if the PA/PLO and Hamas are taken down, but the spigot of social media incitement can be shut off relatively quickly.

Let’s interdict the flow of incitement immediately, as aggressively as we act against weapons shipments to Hezbollah. And we should begin the process of undoing the Oslo mistake as soon as possible.

This entry was posted in Israel and Palestinian Arabs, Terrorism, War. Bookmark the permalink.

1 Response to How to end the intifada — for good