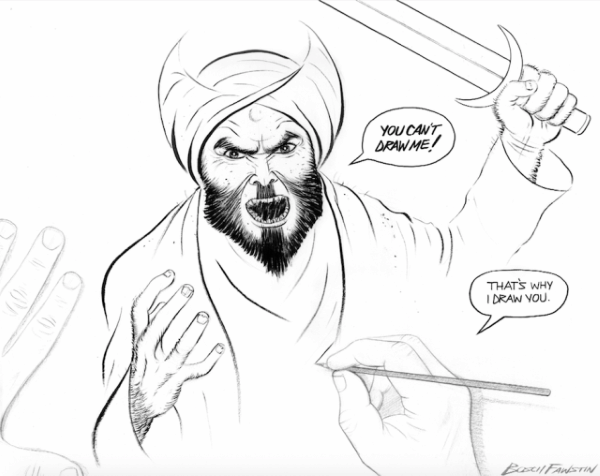 I’m seeing lots of criticism of Pamela Geller for almost getting murdered as a result of organizing a “Draw Muhammad” contest as part of a free speech event. I don’t buy any of it. Here are some of the things people are saying:

As Supreme Court Justice Potter Stewart said in connection with pornography, it may be difficult to define, but “I know it when I see it.” And I don’t see hate speech in the cartoon at the top of this blog. I see a political statement that sharply criticizes an ideology. We are allowed ideological criticism (at least in the US and some, but not all, other ‘free’ countries).

2. It’s stupid. Didn’t she know it would cause trouble? It’s been done — why did she need to take the risk of doing it again?

Probably she did expect ‘trouble’ of some sort. But to not do it would have been to accept the so-called “assassin’s veto” of the principle of free speech. Which is why she had to do it, and why people have to continue doing it. If we don’t, then we start down a slippery slope: Today we can’t draw Muhammad. Tomorrow, what else can’t we do, say or draw?

3. It’s deliberately provocative. She did it to get a reaction and shouldn’t be surprised that she did.

Yes, it is deliberately provocative. See 2) above. But should we allow 7th century barbarians to decide what the appropriate reaction to provocation should be? This is beginning to sound like the argument that the woman in the short skirt deserved to be raped!  And in fact, this very argument is used by the same barbarians to justify forcing women to wear burqas.

4. She just did it to get attention.

Everything she does is to get attention — to make the point that Islam is waging war on the West and the West is pretending that it’s not. Geller is not crazy and is not a ‘bigot’ (a word that is way overused). She is an ideological warrior in what she believes is a civilizational conflict with an aggressive, expansionist Islamic ideology.

Her partner in organizing the event, Robert Spencer, points out that no matter how careful we are to restrain our expression, we will still be targeted by the jihadists: “the more we submit to violent intimidation, the more violent intimidation we are going to get. Why should the jihadis abandon a winning formula?”

Geller thinks that the way to defeat an enemy is to oppose him, not to submit to his demands.

I know, I know. That’s a pretty radical idea today.

1 Response to Pamela Geller is right