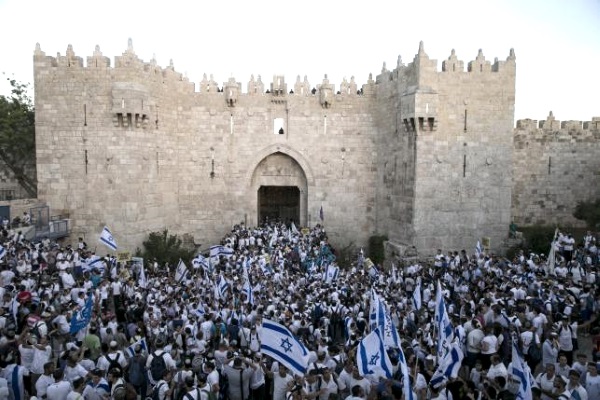 Jerusalem Day march at the Damascus Gate to the Old City

Yesterday was Jerusalem Day. One of the events was a march through the city to the Western Wall, including the Muslim quarter of the Old City. Most of the participants are teenagers from nationalist-religious schools. There have been complaints from Arab residents that some of the marchers shout anti-Arab slogans, and that they have to close their shops and stay inside; and of course some of the Arabs throw stones and other objects at the marchers. There are also (how could there not be) left-wing Israelis demonstrating against the march.

This year there were several violent incidents. Several policemen were lightly injured. Left-wing organizations had filed a petition to the High Court of Justice to stop the march, but the court decided that there was not enough evidence that there would be ‘racist incitement’ to justify stopping the march.

Clearly it is an inconvenience to the Arab residents, and it requires the presence of several thousand policemen to prevent violence (to be honest, to keep the Arabs from killing the participants). And there will always be at least one idiot who yells “death to Arabs,” which is embarrassing. So why do it?

Because we can’t afford not to.

When Israel conquered the Old City in 1967, the Arabs expected that they would be kicked out. After all, that is what they did to the Jews in eastern Jerusalem in 1948. That is what a victorious people in a national conflict over possession of land have always done, if they didn’t kill or enslave the population. But that is not what Israel did. When Israeli law was extended to eastern Jerusalem in 1967, Arab residents were offered Israeli citizenship. Most refused and became permanent residents, with the right to vote in municipal elections, health and social security benefits, etc.

The most important piece of real estate in eastern Jerusalem is, of course, the Temple Mount — the holiest place in Judaism, and the site of the al Aqsa mosque. When the IDF took control of the Temple Mount, IDF Chief Rabbi Shlomo Goren wanted to build a synagogue there (he did not, as he is often accused, want to destroy the mosques and rebuild the Temple). But Defense Minister Moshe Dayan had other ideas: he prohibited Jews from praying on the Mount, and placed its administration in the hands of the Jordanian waqf.

Dayan thought his action would reduce friction with the Arabs, and make it less likely for the conflict to become a religious one. Unfortunately, he didn’t understand Arabs very well.

The Arabs were doubtless confused, but they drew the appropriate conclusions. If the Jews allowed them to stay in eastern Jerusalem, gave them all the privileges of Israelis, and were even willing to compromise control of their own holiest site, there could only be one reason: they are too weak to enforce their will. Thus were the seeds planted for the current situation, which includes absurdities like Israeli police officers arresting Jews who are seen to move their lips when visiting the Mount, and shrieking Arab women confronting Jews who want to just stand there.

In the larger arena, the granting of full rights to the Arab residents of eastern Jerusalem (and the thousands of Arabs from Judea/Samaria who migrated there) had a similar effect, strengthening their ‘Palestinian’ identity rather than giving them an Israeli one.

Today the conflict is very much a religious one, with the cry ‘al Aqsa is in danger’ used to mobilize Muslims throughout the world, and particularly in Jerusalem. And sensing the weakness of Israel’s commitment to a unified Jerusalem (despite official pronouncements) the PLO has made its division a priority among their demands. On the ground, Arab rock-throwers have made parts of Jerusalem no-go zones for Jewish drivers, and Arab vandals and hoodlums are desecrating graves in the historic Mount of Olives cemetery and denying access to it for Jews.

Possession is nine-tenths of the law. Facts on the ground override promises on paper. Use it or lose it. The Arabs understand these things, but many westernized, liberal Jews do not. If Jews don’t live in eastern Jerusalem, if they don’t walk through the Old City, if they don’t pray on, or even visit, the Temple Mount — and especially if they don’t do these things because of fear of Arab violence — then how does it differ from the situation prior to 1967?

Sovereignty is like free speech. If you don’t exercise it regularly, after a while you find that you don’t have it anymore. This is an important lesson not just for Israelis, but for Europeans and even Americans. Your sovereignty is under attack. Don’t let it leak away a bit at a time.

Jewish soldiers, that is to say, ordinary Israeli Jews with families waiting for them at home, fought and died for sovereignty over Jerusalem in 1967. The students that walked through the Old City yesterday did their part, too.

This entry was posted in Israel and Palestinian Arabs, Israeli Politics, Israeli Society. Bookmark the permalink.

1 Response to Jerusalem Day: exercise sovereignty or lose it