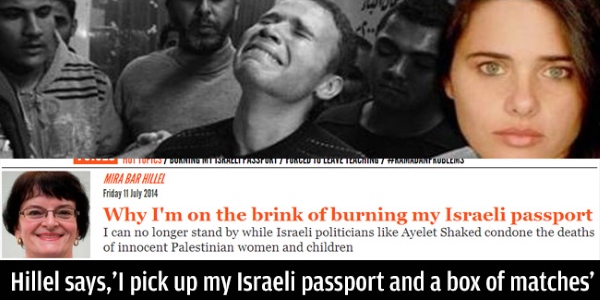 One of the milder examples of the propaganda attacking Ayelet Shaked.

Yesterday’s post about foreign money financing anti-state activities here in Israel was also posted on the Elder of Ziyon blog, where it attracted a few comments. To my surprise (OK, not so much), several of them were opposed to the idea of limiting donations from foreign sources to NGOs in Israel. “Putin would be proud of this,” said one.

Putin aside, keep in mind that neither Ayelet Shaked nor I advocates limiting the free speech of Israelis. Although there is a part of me that would enjoy seeing the leaders of Breaking the Silence (for example) imprisoned for treason, I understand that free speech is a fundamental pillar of democracy — you can’t have the latter without the former.

But look at what is happening here: our enemies — yes, I have to place the EU in that category — are paying individuals and groups in Israel to act against the policies of the democratically elected government. If this isn’t treason, it is something like it.

Yes, I know that the saintly Israelis who are involved in this enterprise would claim that they are doing it for moral reasons, not for the money. In that case, though, they should be prepared to finance their activities themselves, or to accept donations only from other Israelis.

Don’t limit the speech — but cut off the foreign money.

I also want to add a few words about Ayelet Shaked, whom I mentioned yesterday. The vicious slander that accuses her of being a racist who calls for “indiscriminate killing of Palestinians” at best and genocide at worst is being repeated over and over in the international and Israeli media. You can read an accurate translation of the original Facebook post that prompted this attack, which I quoted here, and make up your own mind.

Shaked also wants to tilt the balance of power between the Knesset and the Supreme Court more towards the Knesset. This has triggered hysteria on the part of her opponents (you can read a very good, non-hysterical, discussion of the issue here).

The Left fears Shaked precisely because she is not the ranting ideologue that they present her as, but someone who does her homework and argues rationally, albeit aggressively. As my wife said, “sometimes it’s beneficial that women have to be twice as good as men to get anywhere — because then they are twice as good.”

2 Responses to Foreign money again; the slander against Ayelet Shaked