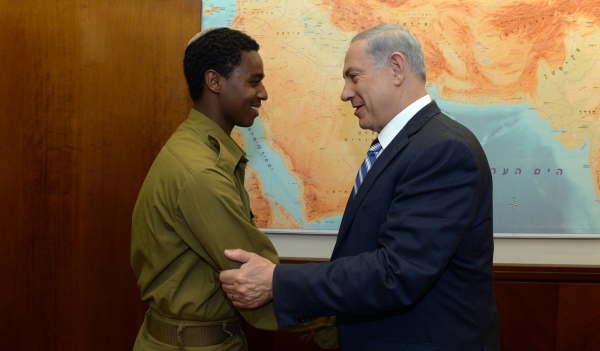 PM Netanyahu meets with Damas Pakedeh, IDF soldier who was beaten by police

We have long been the punching bag and scapegoat for everything in this country. People say that they’re with us, that they brought us here. They didn’t bring us here. We came because of Zionism, not like others who came for economic benefits. When you’re a Zionist, you believe with a full heart that this is your country.

Our forefathers lived here, and we also have the right to live here. But what is going on now is simply a catastrophe. It is racism for the sake of racism. You look for a job today, and even if you’re the best around, there’s a price. Your color carries a price.

But we will not stay silent any longer. We are not our parents’ generation, who kept quiet, kept their heads down and said ‘amen’ to everything. That period is over. We are a new generation fighting for our rights.

— Dana Silbaho, who made aliyah from Ethiopia in 1991, at Tel Aviv protest last week

The protests that became violent in Jerusalem and Tel Aviv by Israel’s Ethiopian community shocked the nation. Ethiopians in general are peaceful, polite and hard-working people who have had a difficult time integrating into Israeli society. Although there was aliyah from Ethiopia as early as the late 1970s, most of the Ethiopian Jews came to Israel in the 90s, from a place where many lived in huts without electricity or running water. Today about half of them live below the poverty line, and they report discrimination in employment and other areas, and — especially — harassment by police.

The recent protests began after an IDF soldier of Ethiopian origin, Damas Pakedeh, was beaten up by police (video) for no apparent reason. This certainly wasn’t the first case of police brutality against Ethiopians — or others — but the video made a big impression.

The Prime Minister met with Pakedeh, a policeman was fired, and the police promised to behave in the future. This is a start — a small one. There are big changes that need to be made, in the police and in other areas.

The police say that the demonstrations began peacefully but suddenly turned violent after ‘anarchists’ incited the crowds, especially in Tel Aviv when demonstrators blocked a main highway at rush hour. The details are still unclear, although the ‘official’ leaders of the demonstrations said they were intended to be peaceful. News reports referred to ‘social activists’ joining the protest.

It wouldn’t surprise me to learn that the social activists were the same extreme Israeli and European left-wing militants that regularly take part in Arab protests against the security fence, which also regularly become violent. But at this point this is speculation.

What I find troubling is the application of the concept of ‘racism’, the parallels being drawn between these events and riots in Baltimore and Ferguson, and the gleeful comments in social media about ‘racist Israeli society’.

I would argue that there is very little racism as such in Israeli society. There is a great deal of discrimination against newcomers, who are always seen as less cultured, more aggressive, and a danger to the position of the ‘veteran’ Israelis. Polish, German, Iraqi, Yemenite, North African and Soviet Jews all faced this. In the case of the Ethiopians, the cultural gap for the first generation was so great that the phenomenon was much worse than, say, for the Poles (the national conflict between Jews and Arabs is entirely different, but is also not racially-based).

The leaders of the Ethiopian movement are making a mistake if they interpret the discrimination against them as classical racism (of course, they are being encouraged to do so by activists with an axe to grind against the Jewish state). Unlike race-hatred, which is almost impossible to eradicate, the problems facing the Ethiopian community have solutions, assuming that the broader society and its leaders have the will to do more than talk about them.

Americans, too,  are quick to make analogies to a situation with which they are more familiar, but they will be wrong.

The situation of African-Americans is different in almost every respect, except for the most trivial one of skin color. African-Americans are not new immigrants. Ethiopians were not slaves of the ancestors of today’s Israelis, they did not live under a Jim Crow regime, and they were never considered subhuman by the majority around them.

These demonstrations have brought the concerns of the Ethiopian community to the attention of the rest of the nation. It may take time to solve all of the problems, but some can be fixed right away.

I suggest we start with the police.

1 Response to Ethiopian-Israelis are fed up