Time to get serious and crush radical Islam

Posted on February 5, 2015 by Victor Rosenthal 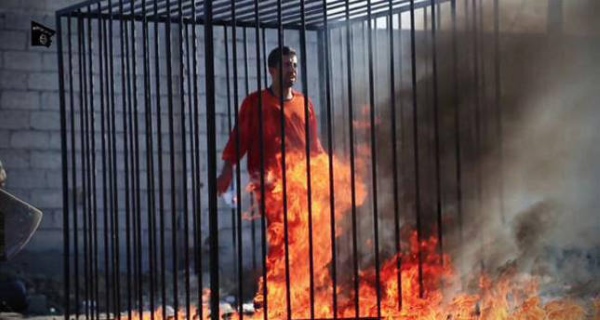 You may know that Da’esh recently released a video of the execution of the Jordanian pilot that they captured in December. After his capture, they asked for suggestions for the best way to kill him, and the method they chose, to burn him alive in a cage, was about as cruel as can be imagined. Some say that they do these things in order to shock or frighten their enemies into submission, but I think that’s only a small part of it. I think they glory in evil and cruelty, perhaps the same way as this man did. The psychological warfare and recruitment benefits of their behavior are secondary. They do it for fun.

Be that as it may, membership in the organization must become a capital crime. The Jordanians have already executed two Da’esh prisoners in their possession, and have threatened to kill more. I hope they do.

Da’esh taps into the deepest wells of evil in the human psyche in order to recruit like-minded creatures. In this sense — you can decide according to your beliefs if there is a supernatural or transcendent meaning here — they are creatures of the devil.

There’s no way to see their point of view, nothing to empathize with, no positive elements in their ‘culture’, nothing to talk to them about. They need to be exterminated like the Anopheles mosquito or the Polio virus. Those who flirt with the idea of joining them must understand that to do so would be a form of suicide.

The Boko Haram of Nigeria are ideologically and behaviorally similar, and there are similar groups in Somalia, Algeria, Libya, Yemen, Pakistan and Afghanistan, Indonesia and other places. All Islamist jihadists, all vicious, all evil.

It is a scandal that the ‘civilized’ world hasn’t yet seriously taken on the task of snuffing them out. US President Obama won’t even say “radical Islam.”

Hamas and Hizballah are slightly less barbaric, at least in their relations with other Muslims. But only slightly, and for Jews or Christians there’s little difference. Unfortunately for Israel, we are almost entirely surrounded by these beings. Some are employed by our more traditional enemies (Iran). Some live inside our country, even our capital, where, like Amalek, they strike at soft targets. Some sit on our borders, and some tunnel under them or launch rockets over them.

This is the most fundamental fact of life in Israel. Survival in this neighborhood requires constant vigilance and a massive allocation of resources to defense. It requires careful gathering of intelligence and bold action when required to interdict the plans of the jihadists, who never cease to plan. It means that everybody’s kids have to postpone their lives for several years of military service. It means that for the foreseeable future, Israelis can never let down their guard, never concern themselves only with ‘normal’ things (this is why the emphasis placed on social issues by PM Netanyahu’s electoral opponents seems surreal).

If you pay attention to what Islamists say, you understand that Israel only seems to be their primary target because it is in the Middle East, an outpost of civilized resistance to the tide of barbarism that is rapidly rising. Israel is an outlying fortress that stands in the way to radical Islam’s real objective, destruction of the Western world order, led by the Great Satan, the United States.

But Barack Obama apparently doesn’t believe that the US is seriously threatened by Islamic jihadism:

Obama emphasized [in an interview with Fareed Zakaria] that while he is mindful of the “terrible costs of terrorism,” terror groups aren’t an “existential threat to the United States or the world order.”

He’s wrong. Until the West recognizes its adversary and commits itself to a long-term and difficult struggle, the jihadists will grow stronger and escalate their atrocities. Unless they are stopped, it is only a matter of time before a (possibly nuclear) mass casualty attack surpasses the horror of 9/11.

Islamic jihadism comes in various flavors, and the Iranian-based Shiite version is at odds with the Sunni Wahabi style of the Muslim Brotherhood and Da’esh. Today Da’esh and Hizballah exemplify this conflict on the killing fields of Syria. But at the same time, the Brotherhood-linked Hamas is trying to regain the Iranian support that it lost when it opposed Assad’s murderous oppression of Sunnis in Syria.

This makes our policy options appear limited. But the truth is that we can’t side with one jihadist faction against another, when all of them are fundamentally opposed to our way of life and just waiting until the day that they can get their hands on our, the West’s, throat. We need to oppose — and crush — them all.

Unfortunately, Obama’s recent turn toward Iran, the ‘bad deal’ that even the Europeans are uncomfortable with that will result in Iran becoming a nuclear threshold state, his apparent support for the Islamist Muslim Brotherhood against the Sisi regime in Egypt, his tacit acceptance of the Bashar al-Assad regime in Syria, and his lack of support, even sabotage, of Israel’s attempt to defend itself against its enemies — all of these show that US Middle East policy is to assist, rather than defeat, its true enemies.

I’m sure that Obama’s words about the costs of terrorism are a comfort to the family of al-Kasasbeh, or to any of the hundreds of thousands who have lost loved ones to jihadists of all stripes.

1 Response to Time to get serious and crush radical Islam