Posted on February 3, 2015 by Victor Rosenthal 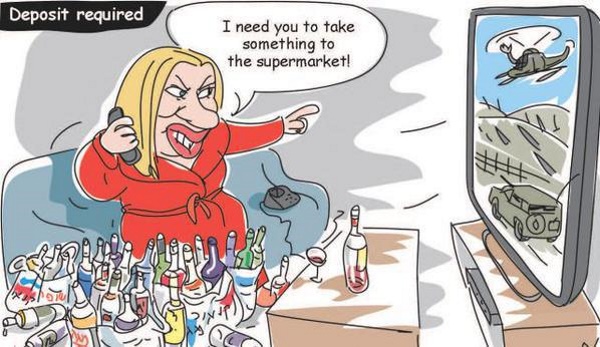 An example of the level to which Netanyahu’s opponents have sunk.

A recent poll has PM Netanyahu pulling away from his challengers in Israel’s election, which is to be held on March 7. Here is the view from the Left:

With the election just over 40 days away, the current electoral picture sees Likud gathering steam; Prime Minister Benjamin Netanyahu [25 seats] widening his lead over his main rival, Isaac Herzog [23 seats]; the three ultra-Orthodox parties stabilizing at about 18 seats, similar to what they had in the previous Knesset; and the centrist parties have collectively lost four seats. In short, Netanyahu would undoubtedly be Israel’s next prime minister.

The poll, which was conducted on Sunday under the supervision of Prof. Camil Fuchs with a representative sample of 514 respondents, confirmed what logic and political experience have long since taught us: When diplomatic and security issues dominate the agenda, Netanyahu benefits, even if there’s plenty of public criticism of his handling of these issues – as there has been over his upcoming trip to Washington to address Congress on Iran.

To be fair, which this writer is not, the “public criticism” he mentions has come from Netanyahu’s opponents, who are digging deep to find something that will get traction against the Prime Minister. It also comes from the other side of the world, where President Obama and his friendly media are frantically trying to head off anything that will complicate his attempt to strike a ‘grand bargain’ with Iran, and partition the Middle East between the Iranian regime and the Muslim Brotherhood (thus betraying former allies Israel, Egypt, Jordan and Saudi Arabia while guaranteeing chaos in Syria and Lebanon).

I’ll also note that it isn’t an accident that Netanyahu benefits when “security issues” raise their ugly heads. Israelis remember the last time Tzipi Livni (second on Herzog’s list and slated to rotate the Prime Ministership with him should they win) had an important role in the government, as Foreign Minister during and after the bungled Second Lebanon War.

Her signal ‘accomplishment’ was UN Security Council resolution 1701, which was little more than a recommendation that Hizballah should disarm, and made no provision to enforce this. Naturally, Hizballah bounced back to the point that they now have three times as many rockets aimed at Israel than they did prior to the war. When the next round is inevitably fought, Livni will have the blood of many Israelis and Lebanese on her hands.

As long as socioeconomic issues continue to be absent from the headlines, the Likud party chairman and his friends can start planning his third consecutive term as premier (and fourth overall).

Israelis agree that the cost of living here, especially housing, is too high. But Netanyahu’s opponents have no believable plan to fix this. Everyone knows that maintaining military readiness is expensive, and the example of 2006 again — when the army was hobbled by years of budget cuts — is fresh in their minds. Netanyahu, unlike many politicians, is well-versed in economics, as is the present Minister of Economy, Naftali Bennett (of the Jewish Home party, expected to be part of the coalition). The opposition is running American-style ads suggesting that Netanyahu represents the ‘haves’ and they the ‘have-nots’, but Israelis so far haven’t been impressed.

So far, it seems the recent reports of corruption and hedonism at the prime minister’s residences haven’t made much impression on the voters, even though most respondents to the Haaretz poll said police should investigate Sara Netanyahu’s alleged pocketing of bottle-deposit refunds that should have gone to the state.

“Corruption and hedonism” sound like fun, but there is no there there. The best they can do is claim the Sara Netanyahu kept money from recycling bottles (there are a lot of receptions, etc. at the PM’s residence). Mrs. Netanyahu is apparently a very difficult person, and she is more or less the Lindsay Lohan of the Israeli media. But after all, she isn’t the Prime Minister, and Israelis are tired of the press’ obsession with her and would like them to lay off. The pettiness of the accusations and the perceived nastiness of attacking the PM’s family is not helping his opponents.

Maybe saying this won’t make me friends back in the old country, but Israelis seem to have a better grasp of what is important in a leader than a majority of Americans:

When respondents were asked a series of questions about a head-to-head contest between Netanyahu and Herzog, the former won handily on almost every parameter, including suitability to be prime minister, and ability to handle Israel’s diplomatic and security problems. On ability to handle Israel’s economic problems, the two tied – but that’s an issue on which the opposition parties haven’t yet been able to focus public attention.

Moreover, on every issue aside from his handling of the economy, Netanyahu actually increased his lead over Herzog compared to the last Haaretz poll, conducted three weeks ago. Most astonishingly [I am not astonished — ed], when Haaretz asked whom respondents thought would be the next prime minister, only one out of four (21 percent versus 58 percent) chose Herzog. In other words, even many center-left voters don’t foresee a Herzog victory.

So it looks like another term is within Netanyahu’s grasp, as long as he doesn’t make any serious mistakes in the next few weeks. And that is as it should be.

4 Responses to Netanyahu pulls ahead