Posted on January 7, 2015 by Victor Rosenthal

Twelve people were killed when at least three gunmen stormed the offices of the French satirical weekly newspaper Charlie Hebdo in Paris Wednesday and opened fire on employees with Kalashnikov rifles and RPGs. …

Video images on the website of public broadcaster France Televisions showed two gunmen in black at a crossroads who appeared to fire down one of the streets. A cry of “Allahu akbar!” — Arabic for “God is great”— could be heard among the gunshots.

The extremist Islamic State group has threatened to attack France, and minutes before the attack Charlie Hebdo had tweeted a satirical cartoon of that extremist group’s leader giving New Year’s wishes. The cartoon entitled “Still No Attacks in France” had a caricature of an extremist fighter saying “Just wait — we have until the end of January to present our New Year’s wishes.”

Four of the most well know cartoonist of France were killed in the attack in Paris: Cabu, Charb, Tignous and Wolinski pic.twitter.com/j4qE1Zi3xa 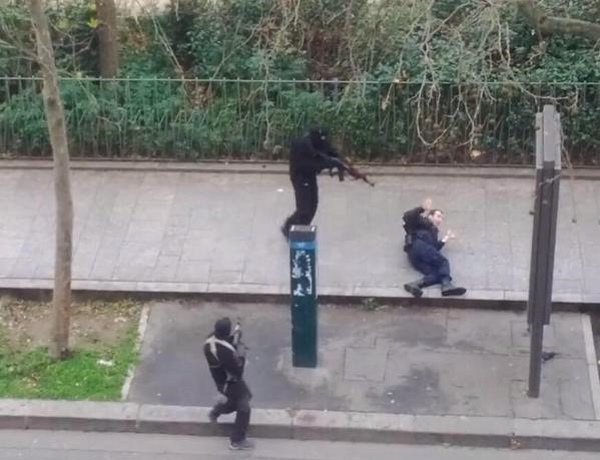 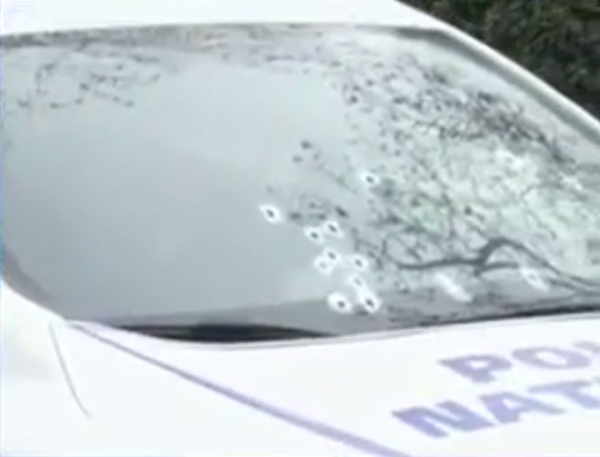 Windshield of police car. The terrorists were not amateurs.

Will anyone in Europe dare to express themselves publicly in a way that will arouse (the very easily-aroused) Muslim rage again? I doubt it (thank goodness that in Israel we can draw whatever cartoons we want. We can’t make them want to murder us any more than they already do).

Now we will begin to hear the condemnations around the world. I hope officials will be able to keep themselves from urging ‘restraint’, and from talking about how these gunmen besmirched ‘true Islam’. We’ve heard more than enough of this.

But whatever they say won’t count for much unless there is effective action taken against the sources of incitement. Just as one can’t draw a cartoon that, according to their definition, insults Islam, we, the civilized world, should define language that we will not permit. Close the mosques, deport or imprison the instigators, kill the terrorists. They claim that they are oppressed? Show them what real oppression looks like. Give them terror for terror.

And although I don’t want to inject my own concerns into this too much, perhaps they could support us in Israel who are facing the same — identical — barbarian horde, instead of falling over themselves to create a new nest of terrorists next door to us.

Unfortunately, I do not have a fresh take on this. I don’t have any original ideas. I think, though, that ‘modern’ approaches fail when you are dealing with this kind of subhuman behavior.

“But that will make us like them,” is the response. Possibly, but if we allow them to overrun us, what’s the difference?

5 Responses to The Charlie Hebdo massacre