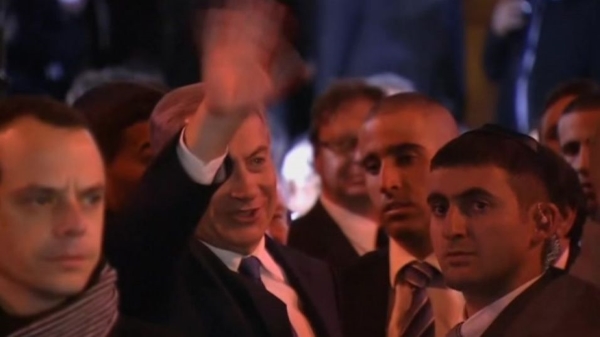 As I wrote yesterday, the presence of terrorist Mahmoud Abbas at the anti-terror march in Paris was obscene. But it’s interesting to note the reason why he was there. Here’s the story:

After the French government began to send invitations to world leaders to participate in the rally against terror, Hollande’s national security adviser, Jacques Audibert, contacted his Israeli counterpart, Yossi Cohen, and said that Hollande would prefer that Netanyahu not attend, the source said.

Audibert explained that Hollande wanted the event to focus on demonstrating solidarity with France, and to avoid anything liable to divert attention to other controversial issues, like Jewish-Muslim relations or the Israeli-Palestinian conflict. Audibert said that Hollande hoped that Netanyahu would understand the difficulties his arrival might pose and would announce that he would not be attending.

A similar message was sent to Abbas, and both agreed that they would not come. On the one hand, I can see Hollande’s point. He wanted the event to be about France, nothing else. On the other hand — and I am sure that Hollande does not want to see it this way — it is at least partly about Jews, and the Prime Minister of Israel has a responsibility to the Jewish people, not just to Israelis. And perhaps he suspected that Netanyahu might suggest that French Jews should consider aliyah (which of course he did).

In any event, Netanyahu changed his mind and decided that he would come. Cynics will suggest that it is because he didn’t want to be upstaged by Naftali Bennett and Avigdor Lieberman, but it is also possible that he realized later that his responsibility to speak for the Jewish people overrode his desire for good relations with Hollande (who, after all, had just voted for an anti-Israel resolution at the UN Security Council).

Hollande was reportedly furious, and invited Abbas to ‘balance’ Netanyahu. And when Netanyahu spoke at the Grand Synagogue in Paris that evening, Hollande got up and left.

This is another chapter in the long and not-so-happy relationship between France and its Jews. When Napoleon offered the Jews emancipation at the beginning of the 19th century, he made demands as well. He decreed that they could live outside of ghettos, removed other restrictions and even made Judaism one of the official religions of France (the others were Catholicism and several forms of Protestantism). In return, he expected that Jews living in France would no longer consider themselves a distinct people. They would be French in every way, Frenchmen and women who practiced Judaism.

But France didn’t live up to Napoleon’s bargain. Anti-Jewish attitudes remained, and when Alfred Dreyfus — an army officer, a French patriot who happened to be Jewish — was falsely accused of treason in 1894, most of the establishment went along with the coverup of the evidence against the real traitor, Ferdinand Esterhazy, and the trumped-up charges and draconian punishment of Dreyfus. The French ‘street’ seethed with anti-Jewish agitation as well. Indeed, the Dreyfus affair was a major motivation for Theodor Herzl’s position that Europe’s Jewish problem would not be solved within its borders.

Herzl was so affected by the Dreyfus case that he as much as predicted the coming Holocaust:

France’s behavior during WWII, when Vichy officials cooperated with the Nazis in sending Jews to their deaths, was not exemplary either, although of course there were many French people who did not cooperate (as there were famous “Dreyfusards” like Emile Zola). Nevertheless, French Jews knew, and know today, that they are somewhat less than wholly ‘French’ when the chips are down.

The recent anti-Jewish violence — the kidnapping, torture and murder of Ilan Halimi, the mob attacks on synagogues, the rape of a woman in her home who was told it was because she was Jewish, the murders at the Jewish school in Toulouse, yesterday’s killing of four Jews at a kosher market, and perhaps most of all, the daily degradation of Jews who are afraid to wear kippot or walk to synagogues, who are cursed, struck and spat on in the streets — has convinced French Jews that the Republic can not or will not protect them.

Hollande apparently is insulted by the fact that they don’t trust the state and him personally, so much so that they appeal to the leader of the Jewish state (Netanyahu was met with cheers (video) when he entered the synagogue) for help and perhaps to provide them with a place of refuge. In addition, he is probably worried about France losing its Jews and the intellectual and financial capital that they represent.

There is also a psychological/political defeat when it becomes manifest that the Republic is apparently incapable of  maintaining its founding principle, the idea of “liberty, equality and fraternity” for all French people, regardless of religion or ethnicity. French PM Manuel Valls said this:

If 100,000 French people of Spanish origin were to leave, I would never say that France is not France anymore. But if 100,000 Jews leave, France will no longer be France. The French Republic will be judged a failure.

I can sympathize with Valls. But how many chances ought the Jews to give to France before they decide that it’s time to go?

This entry was posted in Europe and Israel, Jew Hatred, Terrorism, Zionism. Bookmark the permalink.