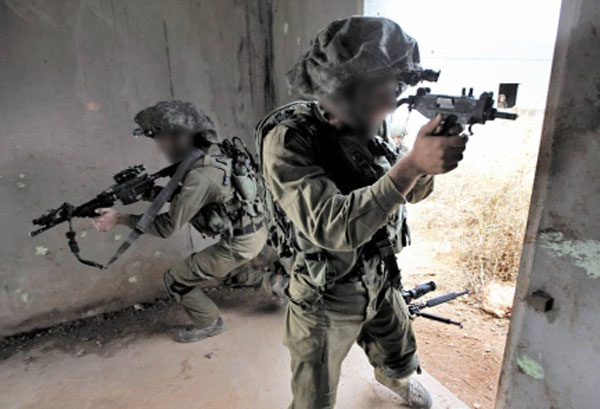 Soldiers of Israel’s Maglan unit in a training exercise

Three soldiers from the Israel Defense Forces’ elite Maglan unit were killed Wednesday by an explosion that took place as their unit was inspecting a tunnel entry shaft discovered in an UNRWA clinic in the southern Gaza Strip town of Khan Younis. Fourteen soldiers were wounded in the incident.

This hurts in a personal way. Maglan is my son’s unit, with which he served in the late 1990’s. He still does reserve duty with some of the same soldiers who went through the training cycle — one of the toughest in the IDF — together. Maglan isn’t as well-known as some of the other special forces units like the Sayeret Matcal, but it is always in the thick of the fighting. In 2002, its commander, Dror Weinberg, was killed in a vicious firefight with terrorists in Hevron, and it lost several of its members in the Second Lebanon War.

So here is yet another case of UN — UNRWA — facilities being used by terrorists, following three cases in which rockets were found stored in UNRWA schools. Karen McQuillan has assembled a few facts about UNRWA:

UNRWA — the UN Agency dedicated solely to helping Palestinian “refugees” — has 30,000 employees; all but 200 are Palestinian.  And we, the U.S. taxpayer, support them with almost a quarter of a billion dollars a year!  … [The US is the single largest donor to UNRWA, paying about 1/3 the total cost. The EU is the second largest].

Since there are only 30,000 Palestinians alive today who were displaced by the Arab war against Israeli in 1948, that’s a one to one staff to refugee ratio.  Of course, for the Palestinians there’s a special definition of being a refugee and qualifying for money — no it’s not for life, it’s for the generations, and it makes no matter if you become the citizen of another country. (2 million Palestinian ‘refugees” became citizens of Jordan.)  It doesn’t matter how much you earn, or if you own a mansion.

We are now supporting the fourth generation of Palestinians.  They need only have one-eighth of a connection to Israel, that is, one great-grandparent who once worked in Israel (not lived there, worked there – and part time counts). They are still entitled to your money.  The U.N. even defines Palestinians as refugees who always lived on the Arab side of the 1949 armistice line.  There are supposedly 5 million Palestinians whom we owe.

In contrast, U.N. international staffing for all other refugee services in the world is less than 6,000 people – that’s for  126 countries such as Sudan, Somalia, Syria, and in Africa – where there are genuine refugees in need of emergency food and housing.  The most staff any one country gets is 437.  Yes, 437 compared to 29,800 for Palestinians.  Other people only get to be called refugees until they are resettled somewhere.

Naturally, Palestinian refugees receive larger stipends when they have more children, a recipe for exponential growth. And  UNRWA schools teach them that their future is not in assimilation or even in the creation of an independent Palestinian state, but rather in ‘return’ (all 5 million of them) to the land that is now Israel. How is this anything but a recipe for future war?

UNRWA is highly politicized and maintains only the thinnest pretense of impartiality. Most, if not all, of its Gaza employees support Hamas. Even if some of them are opposed to terrorism, they would be crazy to try to prevent Hamas from using their facilities as they wish.

UNRWA, like the several other UN agencies dedicated to supporting the Muslim nations’ war against the Jewish state, exists in its present form because the UN itself is controlled and corrupted by those nations. Joshua Muravchik explains how the UN, which recommended the creation of a Jewish state in 1947, became its deadly enemy:

How did it all turn around so dramatically? During its early decades, in the aftermath of World War II, when American power and prestige was high, the US largely dominated the UN.

Washington pressured its European allies to relinquish their empires, and the UN pushed decolonization. Thus were scores of new nations born in Africa, Asia, and the Middle East. The UN grew from 51 to 193 members.

Many formed the Non-Aligned Movement. Originally this meant non-aligned in the Cold War, but NAM did not disappear with that conflict. Today it has 120 members, thus controlling every UN body except the Security Council where the “Permanent Five” hold vetoes.

Fifty-seven of the NAM’s 120 members are members of the Organization of Islamic Cooperation, meaning that the OIC dominates the NAM. And the core of the OIC is the 22-strong Arab League. Thus, through telescoping leverage have the Arab states turned the UN into a kind of crusade organization against Israel.

Today Israel is in the front line of the struggle between those who accept the Western ideal of free, democratic, religiously tolerant societies with equal rights for all, and those who believe that the seventh-century vision of Islam — unfree, undemocratic, intolerant and based on a hierarchy of rights in which the Muslim male rules all others — is the proper form of human society.

That is ultimately what those rockets Hamas is launching are about. If Israel falls, any hope of saving the Middle East from division into Sunni and Shiite Islamist caliphates is doomed. The survival of Western civilization itself will be in question.

The UN, which was created as a result of the horrors of 20th century world wars as a way to ensure peace in the future, has become something entirely different. Today it is no more or less than the diplomatic wing of the Islamic jihad that is moving aggressively against the West in the military sphere as well.

It’s past time to kill this cancer that we have been feeding. I suggest that those UN agencies that perform valuable functions — the World Health Organization, for example — and that have not already been turned into political weapons, be spun off as independent organizations that will be beholden to their funders and not under control of UN bureaucracy. The rest of it should be left to die — including UNRWA.

This entry was posted in The UN. Bookmark the permalink.

1 Response to Kill the cancerous UN