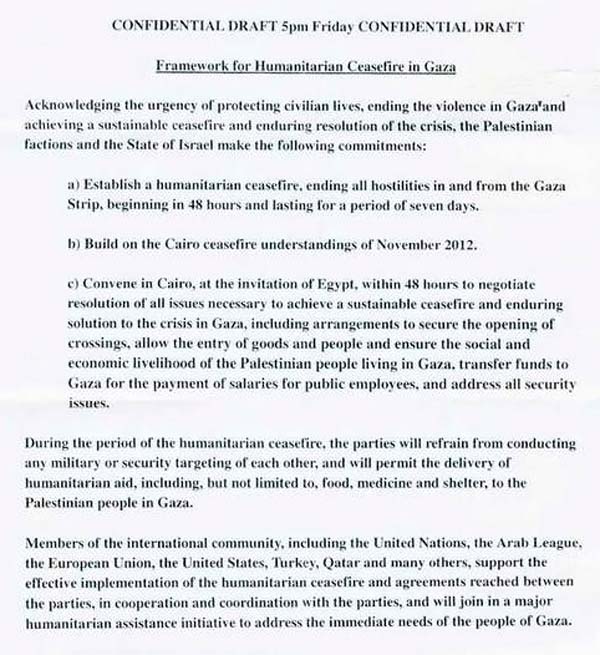 The draft of a ceasefire agreement developed by John Kerry and Hamas supporters Turkey and Qatar — without input from Israel, Egypt or the PA — and presented to Israel on Friday, is precisely as bad as was reported yesterday.

It allows Hamas to keep its rockets and tunnels (they are not mentioned) and grants Hamas most of its demands. It does not suggest that Hamas will pay any penalty for its aggression and war crimes; indeed it will be rewarded.

It’s interesting that the word “Hamas” doesn’t even appear. “The Palestinian factions” are not listed, probably because some of them are designated as terrorist entities by the US and other nations, and “payment of salaries of public employees,” skates close to financing terrorism — something prohibited by US and international law (h/t: SB).

Of course this proposal was not accepted by Israel. If it is allowed to continue, Israel will destroy the remaining tunnels and rocket launchers and possibly even bring down the Hamas government. It will take at least a few weeks, and during this time there will be an accelerating humanitarian crisis in which the civilian population of Gaza will suffer enormously. Israel, too, will suffer casualties.

For that reason, an end to the fighting is desirable. But an agreement to end it must do more than provide Hamas with a respite to rebuild its tunnels and restock its rocket warehouses. It must effectively provide for the disarmament of Hamas and for the punishment of Hamas leaders who are guilty of war crimes.

Participation in the process of ending the conflict should be limited to the countries that are directly affected by conditions in Gaza: Israel, Egypt and the PA (perhaps also Jordan). Turkey and Qatar have no more place at the table than New Zealand. Why should they?

The UN, John Kerry, various governments and media that have expressed anguish over the humanitarian situation should realize that this is the best hope to end the conflict and save innocent lives.

But if they persist in demanding that Israel surrender to aggression, then they bear the responsibility for the suffering of innocents no less than the Hamas war criminals that precipitated it.

1 Response to Kerry, come quick! The Jews are winning!