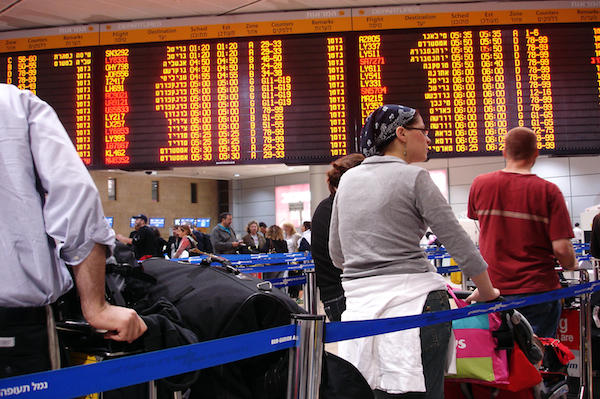 Departure board at Ben Gurion Airport. It is Israel’s main connection to the rest of the world.

In a sign of increased caution about flying near combat zones, US and European airlines halted flights to Israel Tuesday after a rocket landed near Tel Aviv’s Ben Gurion Airport.

Delta Air Lines and United Airlines suspended service between the US and Israel indefinitely. US Airways scrapped its one flight to Tel Aviv Tuesday. Germany’s Lufthansa and Air France also suspended flights. The actions come days after a Malaysia Airlines jet was shot down over eastern Ukraine with 298 people on board.

Following the action by the US airlines, the Federal Aviation Administration prohibited US airlines from flying to the Tel Aviv airport for 24 hours.

This is a very grave development. Ben-Gurion airport is Israel’s main connection to the rest of the world. The economic and psychological disruption that could occur if it were to be closed for a long period would be very severe.

The immediate cause was a Hamas rocket which landed in Yahud, about 1 mile away, and it appears that Hamas is now trying to fire rockets in this direction, as they have threatened to do. Although the airport itself is protected by an Iron Dome system, it’s easy to see why airlines might be nervous. It’s hard enough flying into busy airspace without having to worry about rockets falling from the sky and Tamir missiles coming up to meet them from below.

In fact, one of the most powerful arguments against withdrawing from Judea and Samaria is that it would enable terrorists to subject the airport to the kind of bombardment that has so far been reserved for Sderot and the kibbutzim next door to Gaza.

Israel’s Transportation Ministry says that the airport is safe, and El Al will keep flying. But Hamas should understand that they have significantly raised the ante by targeting the airport, and escalation will be matched by escalation. We can expect the IDF to push harder to find and destroy long-range rockets and launchers.

Hamas believes that its human shield strategy will continue to constrain Israel and protect its headquarters and rocket launchers. But there is a limit to how much pressure the international community can apply, and if Israel’s leaders feel that the threat from Hamas is approaching an unacceptable level, they might loosen rules of engagement and stop answering the phone. I think a rocket barrage aimed at the airport falls into this category.

This is even more evidence, if any more is needed, that there must be no ceasefire until Hamas’ offensive capabilities are fully neutralized — whatever that takes.