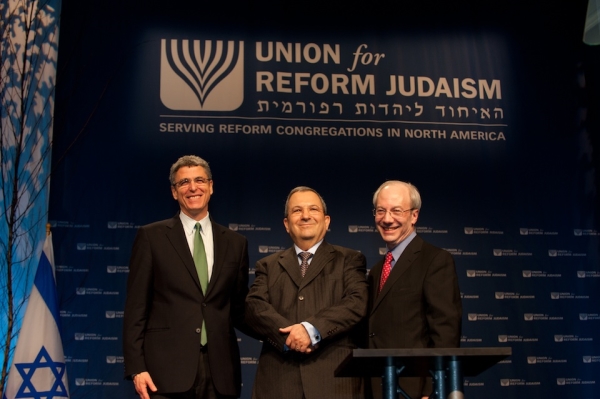 A few days ago, I wrote a post about the former head of the Reform Movement’s lack of respect for the new President of Israel, Reuven Rivlin. I objected to the typically American mixture of “ignorance of Israeli security issues, politics and culture” with the arrogant implication that Israel had better pay attention to the instructions from their movement, or else.

I had no idea what was coming. Rabbi Rick Jacobs, current Union for Reform Judaism (URJ) head, has published a rant against Israel’s President that has me, as an American Jew and citizen of Israel, spinning with embarrassment.

In 1989, you visited Temple Emanu-El, a Reform synagogue in New Jersey. In an interview after your visit you told a reporter from Yedioth Aharonot about your experience, where you disparaged, with stunning insensitivity, the dominant religiosity of North American Jewry, our Reform Movement.

I’m hoping that you’re ready to update your harsh and rather unenlightened views of our dynamic, serious and inspiring expression of Judaism that animates almost 900 congregations representing over a million and a half North American Jews. …

I, and our entire Movement, stand ready to work with you to strengthen our people and our Jewish State. I also hope you will accept my invitation to visit our thriving congregations, our academies of higher Jewish learning, our 14 overnight summer camps, the largest Jewish camp system in the world, teeming with young Jews living exuberant and committed Jewish lives.

So, 25 years ago President Rivlin was quoted saying that what he saw in a Reform temple looked like idol worship or Christianity. And since then he has had a difficult time applying the title ‘rabbi’ to Reform rabbis.

Rivlin has always been very outspoken. He does not hide his feelings. But regardless of the number of Reform Jews in the US and how many summer camps they have (for some reason, Jacobs thinks this is important), Rivlin has a right to take a personal position about what Judaism is, and he is not required to change.

I am sure Jacobs feels slighted, but it is inappropriate to fire back 25 years later with his own insults intended to undermine the President of Israel before he has had a chance to even begin his duties. Everything isn’t about the sensitivities of American Reform Jews.

I wonder if Rivlin’s right-wing politics also have something to do with the URJ’s unhappiness.

Jacobs proudly mentions that he will be defending Israel against those who want the Presbyterian Church (USA) to divest from companies doing business in Israel. One wonders how he can do this, given that until he became URJ President he was a board member of the New Israel Fund, which supported organizations that called for boycott-divestment-sanctions against Israel.

He also was a member of the J Street Rabbinic Cabinet. J Street is a lobbying organization which claims to be “pro-Israel and pro-peace,” but which consistently takes anti-Israel positions.

Many Reform Jews strongly opposed Jacobs’ selection as URJ President because of these connections. It didn’t help that he gave a Yom Kippur sermon to his congregation in tony Scarsdale, NY in which he proudly told about taking part in an — I have to call it this — anti-Israel demonstration in Jerusalem.

The URJ offers to work with the President to “strengthen our people and our Jewish state,” but what it has done in the past is to stick its naive nose into Israel’s business with such things as a recent letter to PM Netanyahu, about which I wrote,

The letter lauds President Obama’s ‘leadership’ for helping to bring about Netanyahu’s apology to Turkey over the Mavi Marmara affair, which I and others believe to be a disastrous mistake.

And — almost incredibly, given the recent history of Israeli withdrawals and concessions answered only by war, terrorism and further demands — the letter has the chutzpah to call for Israel to make “painful territorial sacrifices for the sake of peace.”

What I think is that the folks displaying “stunning insensitivity” and holding “unenlightened views” are Rabbis Jacobs, Yoffie, et al. I suggest that they concentrate on the URJ’s important mission to manage the “largest Jewish camp system in the world” and spend less time trying to bully the state of Israel and Israelis, of whom they have very little understanding.